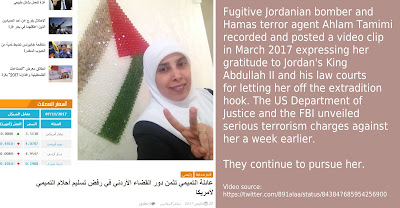 This week, as he has done for several years, Jordan's absolute ruler is in New York, ostensibly to attend and to speak at the annual opening session of the UN General Assembly.

It is possible he will be officially received in the US halls of power again as he has on his many previous visits. Given the context, this is surprising - even bizarre.

We are the parents of Malki Roth whose confessed killer, a Jordanian woman called Ahlam Tamimi, lives free as a bird under the explicit protection of the Jordanian government. This despite her having facing US Federal terrorism charges and being on the FBI's Most Wanted Terrorist list. She is a Jordanian celebrity - not despite the bombing she masterminded in Jerusalem that was intended to kill as many Jewish children as possible but because of it.

Jordan has had an active extradition treaty with the US, covering cases exactly like Tamimi's, since 1995.

Jordan has never refused to extradite until the Tamimi case. Indeed it has extradited a string of Jordanian terrorists who are now imprisoned in the US. So what makes Tamimi different? We think it's that she is the first Jordanian whose extradition was requested by the US and who confesses openly to have specifically targeted Jews in the attack.

Jewish children, to be more exact about it.

Since Jordan's highest court declared its 1995 treaty with the US invalid two years ago, there has been an extraordinary media blackout in the West, and in particular in the United States, on any mention of what Jordan has done. Jordan itself maintains strict and total silence on its refusal to hand her over to the US authorities.

Even more troubling, important parts of the US government, which ought to be leading the charge to encourage Jordan - a strategic ally of the US that is highly dependent on US aid - to live up to its treaty obligations have avoided almost all public mention of the issue. If they have been pressuring Jordan (as is occasionally claimed), there are no signs of this at all. 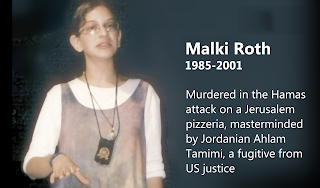 In the interests of encouraging greater awareness of the Tamimi/Jordan scandal, we offer this list of articles we have written (from a much longer list gong back several years) during the past year.

Ours are not the only voices speaking out on this issue. But try to find mainstream media articles that deal with the issues. You might be searching for a while.
Questions and comments? Reach us at thisongoingwar@gmail.com