We have devoted several years and considerable effort to generating awareness of the almost unfathomable evil of a Jordanian woman, Ahlam Tamimi (speaking on this video).


Tamimi is a high-profile fugitive from the FBI with a $5 million reward on her head from the US State Department. She freely admits for the record and in public that she played a key role in the August 9, 2001 bombing of the Sbarro pizzeria in the center of Jerusalem. She has boasted of how she deliberately targeted and succeeded in massacring the Jewish children inside and on the street. One of them was our fifteen year old daughter Malki.

She is protected by the Kingdom of Jordan which, in cynical breach of its 1995 extradition treaty with the United States, has refused since 2013 to hand her over to the US authorities for prosecution on terrorism charges. It continues to give her safe haven.

But her hitherto-frequent travel in and around the Arab world, a key part of her evolution as a pan-Arab celebrity, has come to a halt as a result of an Interpol Red Notice.

What's more, for the nearly five years starting early 2012 and ending in mid-2016, it provided her with the freedom and means to have a TV program of her own called "Breezes of the Free", which she recorded in Amman, Jordan every week [see "27-Apr-17: Satellite TV and other basic rights of terrorist life behind Israeli bars"] for a global TV and Internet audience.

The purpose of the show was to encourage support for Arab-on-Israeli terrorism, to celebrate and honor the terrorists and to provide a two-way channel for communication between terrorists imprisoned in Israel and their families.

It's important to keep in mind that the privilege of engaging in years of incitement to extreme violence given to a confessed mass murderer comes against a background where Jordan has one of the most tightly controlled and un-free media regimes in the world [see "20-Jan-18: Shutting down media critics in Jordan isn't quite the challenge it might seem to be"]. Had Jordan wanted, Tamimi - along with her Hamas and Muslim Brotherhood sponsors - could never have gotten these hideous "Breezes" off the ground.

Our personal efforts to get Tamimi in front of a US federal court to face charges in Washington DC involve a good deal of political awareness-raising and lobbying in the US. Our daughter Malki was a US citizen.

Exactly a week ago, Haaretz - in a story filed from Washington by Amir Tibon who is its correspondent in the US capital - reported online on efforts to bring the thwarted Tamimi extradition issue to a larger audience. (Though we're not mentioned, we are the instigators of those efforts.)

Ahlam al-Tamimi took part in the organization of a 2001 bombing at a pizza place in Jerusalem that killed 15. These American lawmakers want Jordan to extradite her to the U.S. https://t.co/wCuXak29Jq
— Haaretz.com (@haaretzcom) August 29, 2019

The following day, the paper edition of Haaretz arrived at our front door as it has, in both Hebrew and English editions, every Friday for years. We rubbed our eyes at what we saw: 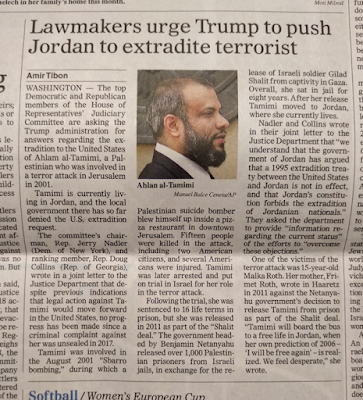 The almost-comical use of the photo of a bearded man to depict a 39 year old female media celebrity with a long history of public appearances and blowing children to pieces obviously had nothing to do with the Haaretz reporter. He was simply conveying the facts.

So we reacted by addressing the newspaper's well-known publisher via Twitter:

As #MalkiRoth's father, it's troubling that our battle to get her killer, #AhlamTamimi, extradited from Jordan to face terror charges in the US gets zero coverage in @Haaretz and other mainstream media.


Obviously the editors had the wrong person. But do they even know at Haaretz who Ahlam Tamimi is? It's hard to tell.

And if you're wondering - yes, we're troubled by how no one from the paper-publishing side of Haaretz has bothered to respond to us. Of course being ignored, as anyone following this blog knows, is hardly a new experience for us.

And there's this: over at the Hebrew version of Haaretz, they have given no coverage at all, zero, nada, to the Nadler initiative: not online, not in their highly influential daily newspaper. It seems, as friends have told us, that the Israeli election campaigns now underway dwarf everything else.

But then nor has Haaretz ever published a word about our years of efforts to see Tamimi tried on terrorism charges.

And a lot more importantly, given its unexamined implications, Haaretz in all its various Hebrew, English, online, on-paper editions entirely ignores, just as do many other mainstream news outlets do, the much larger and weightier matter of Jordan's mendaciousness in purporting to fight terror while keeping one of its highest profile practitioners safe, well and protected in the bosom of the Hashemite Kingdom and its law courts.