31-Jan-20: Fox News break ranks with the mainstream media on Tamimi and Jordan 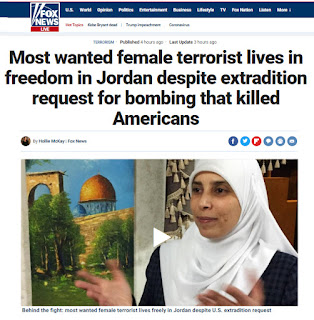 It's something of a milestone.

On Wednesday, over on the heavily-trafficked Fox News website, there's an informative long-form report that deals with our efforts to see Ahlam Tamimi, the Jordanian Islamist who masterminded the massacre at Jerusalem's Sbarro pizzeria in 2001, finally brought before US justice.

Written by Hollie McKay, the article is entitled "Most wanted female terrorist lives in freedom in Jordan despite extradition request for bombing that killed Americans" [archive]

Tamimi faces serious Federal charges in the United States for the central role she had in the mass-casualty attack. The FBI and the US Department of Justice have made serious efforts to take her into custody and reached what we think is the limit of their capabilities, absent the involvement of the political echelon of both the United States (by far the more important side) and the Hashemite Kingdom of Jordan.

The mainstream media pay almost no attention to Tamimi, to Jordan's egregious (and frankly disgraceful) refusal to comply with its own 1995 treaty with the US, to our efforts, to the effect the Jordan/Tamimi scandal is having on the unchecked spread of Islamist and extremist pro-Palestinian Arab violence, and to how US politicians (with some important exceptions) treat the affair as untouchable and us - the parents of one of the many murdered children who were targeted by Tamimi - as lepers.

Our thanks to Fox News and to Hollie McKay whom we've never met, for focusing on what we are sure is an important story that exemplifies how justice in the plainest sense can be denied for shabby and unspoken political motives.

We're hoping other parts of the media will now step up and give it some more attention. And that the pressure for Jordan to extradite this unrepentant savage so that US justice can at last be delivered to her in accordance with the law.