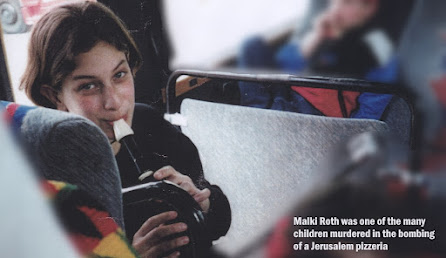 [The following post first appeared, in a modified form, on the Malki Foundation blog site under the title "Israel's IDF pays tribute to Malki's life"]

Over on the YouTube page of the Israel Defense Forces, there's a new video, just 5 minutes long, that was published in August to coincide with the 21st anniversary of the awful events at a Jerusalem pizzeria in 2001.

Entitled "The Sbarro Massacre: The Value of Life over Violence", it comes with this summary prepared, we imagine, by the documentary film maker soldiers in the office of the IDF Spokesperson's Unit:

After losing his daughter Malki in the Sbarro Massacre 21 years ago, Arnold Roth and his family chose to take the example she showed in life and share it with others. For the terrorists who killed her—and thousands of others over the years—violence and murder is their end goal. For us, life is precious and we do everything to protect, preserve and sanctify it in every way possible. http://www.kerenmalki.org/

We identify with every word.

And we're proud and pleased that the work of the Malki Foundation, along with the very difficult circumstances that led to its establishment, have gotten this kind of recognition.

The video, which is also posted on YouTube under the title "The Sbarro Massacre: The Value of Life over Violence", has attracted some 5,6,00 views so far.

There are separate versions with French subtitles and Spanish subtitles. Please share them with your friends and help us reach wider audiences who need to know about Malki's life and the good work done in her name.