22-Nov-22 Abu Akleh: What the Washington Post said and what it didn't 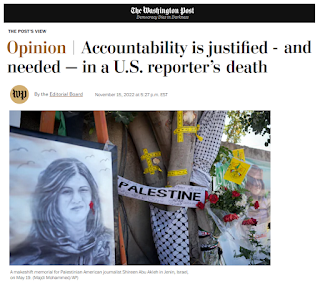 A few days ago in his Twitter account, Arnold Roth posted a response to a problematic - and to us, painful - editorial in a major daily newspaper two days earlier.
Here's the comment he offered:

@WashingtonPost's editorial on Tuesday [https://washingtonpost.com/opinions/2022/11/15/shireen-abu-akleh-journalist-death-accountability/] passionately backs @TheJusticeDept in probing the Abu Akleh death. I could change a handful of their words and make this about my daughter, murdered by an Arab reporter. Anyone think it would then get published?

He was reacting to a Washington Post opinion piece published in the name of its Editorial Board under the title "Opinion | Accountability is justified — and needed — in a U.S. reporter’s death".
His tweet included this extract from the published editorial:

And here's what the Washington Post editors could have said but of course did not.

There are no signs that accountability (meaning of course its absence) in the Tamimi case troubles the Washington Post's editors in even the smallest way.
We have some additional things to say about the Abu Akleh case, how it's being championed and weaponized. And how totally different its impact has been on Washington and on America's media, as compared with the long-thwarted prosecution of another Arab reporter in the news: Ahlam Tamimi, the journalist who remains free in Jordan despite the federal terrorism charges pending against her in a US federal court since 2013.
Stay tuned.