23-Aug-21: Turbulent dimensions, years of pushing: Seeking justice with the help of StandWithUs 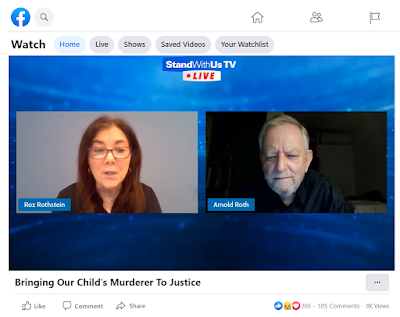 From an April 2021 Stand With Us announcement headed Bringing Our Child's Murderer To Justice:

In 2001, Malki Roth was murdered in the Sbarro restaurant suicide bombing in Jerusalem along with 15 other people. Now, Interpol has dropped the international arrest warrant for the mastermind behind this heinous terrorist attack, Ahlam Tamimi. Tamimi, who now lives in Jordan, has shown no remorse for her despicable crimes.

On this week’s episode of StandWithUs TV Live, Malki’s father, Arnold Roth will join us in conversation with Roz Rothstein, StandWithUs Co-founder and CEO, about terrorism, the impact Malki’s tragic death had on his family and the battle to have Tamimi extradited to the US to face charges.

Our great and sincere thanks to Roz Rothstein and her indefatigable team of professionals and activists for their many years of fine work.