19-Nov-20: Putting justice back on the agenda

We did something yesterday that we have never done before.
We ordered a display advertisement in a mainstream newspaper: today's (Thursday’s) Jerusalem Post. Our message appears on its front page.

The timing of our ad is intended to coincide with U.S. Secretary of State Mike Pompeo’s visit to Israel that began yesterday afternoon (Wednesday November 18).

Our hope is that he will see it at breakfast. And that perhaps he will think about the images we included, as well as the scriptural quote at the top of the text: “Justice, justice thou shalt pursue”.

The words from Deuteronomy (the Biblical book called Devarim in Hebrew) will be recited in the Jewish world's annual cycle of Torah reading when we get to Parshat Shoftim, the weekly portion called “Judges”.

That happens next in August 2021. By coincidence, the same week will include the twentieth anniversary of the Sbarro pizzeria massacre.

There are two images in our Pompeo advertisement. One shows Malki. The other is of the devastated Sbarro pizzeria in the center of Jerusalem, minutes after a bomb placed by Ahlam Tamimi exploded inside.

Tamimi, a Jordanian woman who arrived from her homeland alone, soon joined Fatah. And then, in June 2001 and aged 21, she switched to Hamas. She was evidently in search of something and found it that summer: the opportunity to kill Jews on a satisfyingly large scale. It was an opportunity she grabbed.

On the morning of July 27, 2001, a Friday, Tamimi carried a smallish made-by-Hamas bomb embedded inside a beer can and surreptitiously placed it on a shelf in what was then a Co-op Supermarket. This was located in the basement of a building on Jerusalem’s King George Street that locals knew as Hamashbir. It's an office building today with some shops at street level. She quickly left the scene.

The bomb fizzed with no serious damage except to the ambitious bomber’s pride.

By her own account, she raged in fury at her Hamas handlers right afterwards and demanded something much larger. She got it ten days later: a diabolical exploding guitar case and a young religious fanatic eager to carry it on his back into whatever target Tamimi chose.

Tamimi scoured Jerusalem and chose Sbarro. The busy pizzeria with the good hashgacha (certificate of being kosher) was popular among religiously observant youngsters like Malki. Tamimi has for years wanted it to be known that her choice was based on the large number of Jewish children reliably inside at that hour. We don't know why this single fact does not lead every report ever published about this exceptionally cold-blooded murdering Islamist. It should.

Mostly behind the scenes, we have pressed the United States to insist Jordan extradites Tamimi since 2012. She has faced serious federal terror charges since they were unsealed by a team of senior department of Justice officials in a public event in March 2017. They had been issued secretly by a judge four years earlier.

This evidently was known to the senior members of Jordan’s political and royal power structure. That’s because secret – and entirely unsuccessful - efforts were made by high-level American officials for several years to persuade Jordan to hand Tamimi over to the FBI. They knew Tamimi was charged even before we (or even the US Congress) did. And to be clear about this central element: there's been an active and totally valid treaty between Jordan and the US since 1995 for the extradition of fugitives like Tamimi. The State Department said nothing for years about the way Jordan breaches that treaty in the Tamimi case (though not in other cases). It started being open and explicit about it late last year ["03-Nov-19: In Washington, a step towards bringing the Sbarro bomber to justice"]

Why should US charges and American justice even enter the Tamimi story?

The simple answer: Because Malki had American citizenship via her New York-born mother. And there’s an American law that gives it the right and the obligation to go after terrorists who kill American nationals outside the territorial United States. Once taken into custody, the fugitive terrorist can be flown to the US and tried in a US court under US law. It’s what ought to have happened to Tamimi.

But first the FBI has to get its hands on the fugitive terrorist.

The good news is the US and Jordan signed a treaty to facilitate extradition in both directions. That was in 1995, and in the years that followed extraditions were carried out on request just as the treaty stipulated. But something about the Tamimi case made it different for the Jordanians. They started refusing as soon as the requests arrived and have continued refusing right up until today [see "16-Nov-20: Justice, the Tamimi extradition and what Jordan tells Arabic media but not the world"]. The US has made clear its view that Jordan is wrong,

Tamimi not only lives in complete freedom under the patronage of the Jordanian government but has become a media celebrity there and in large parts of the Arab world. The details are chilling - almost beyond comprehension.

Our Jerusalem Post ad is a call to action to the Trump administration and specifically to its Secretary of State. There’s no political dimension to it - just a call to compel Jordan to abide by a bilateral treaty to which it is a party. And for pure and simple justice to be done.

We have made repeated efforts to recruit politicians to give our campaign some clout but they have borne no fruit. And it’s not that we’re on the wrong side of politics because we’re not on any side.

It’s also not that people actually refuse our request or argue with us or give us cogent reasons why Tamimi ought to be left alone. That’s of course not true about Jordan. There its media, some of its public officials and citizens enthusiastically stand with her.

What mostly happens is we’re ignored. Many of those we approach don’t return our calls or emails or look right through us if we happen to be speaking face to face.

How likely is it that this time will be different? Hard to know but it doesn’t matter to us. Tzedek tzedek tirdof, as the scripture says. Justice, justice though shalt pursue.

We’re not alone. As our ad says, we have a petition (here - and it's not too late to sign if you haven't already). Thousands of people from everywhere – a not insignificant number of them from Arab countries and even from Jordan – have signed. Their support encourages and empowers us.

“Secretary Pompeo, it’s not too late to act” reads our banner headline. “We ask that you do what needs to be done so that Tamimi is at last brought to justice in Washington.”

Next week, after the American visitor leaves, we will go, just the two of us, to Malki’s grave. We do that every year on her birthday. This next time, we are going to have to deal with the reality that she would have become 35 years old that day - but instead she was ripped from our grasp and will not come back.

We remember her precious life when we get together with our children and grandchildren. And we feel gratified and proud when we look at the exceptional work done daily by the Malki Foundation, the charitable organization that for the past nineteen years has served as a non-sectarian memorial to Malki's short but remarkably impactful life.

And at night when we dream that she is alive and hug her lovingly.

Secretaries of State come and go as do ambassadors and presidents, prime ministers and kings. What never goes away is the absolute need to keep justice at the center of our lives as families and as a society. Our advertisement comes to deliver that message to the breakfast table of movers and shakers as well as to the hearts of ordinary people everywhere.

Here below is the advertisement as published this morning on the front page of the Jerusalem Post's paper edition: 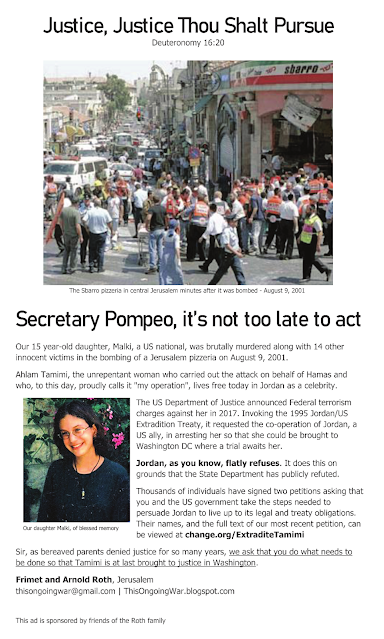 UPDATE December 5, 2020: Not a word of media comment from any of the many reporters traveling with the Secretary of State. And no response from Secretary of State Pompeo or any of his spokespeople, advisers, assistants or relatives.