08-Oct-17: Why kill religious Jewish children? Because, says Hamas celebrity-jihadist, this is a religious struggle

We're posting this here and now because the Arabic-speaking world is currently in the grip of a spate of Arab media articles defending, supporting and celebrating the murders done by Ahlam Tamimi, the woman who masterminded the murder of our child. In fact, they're protesting the very notion that Tamimi is now wanted by the FBI. (Here's one of many examples from the past three days.)

The self-confessed murdering jihadist, interviewed by the ever-eager media (take a bow Associated Press and Al Jazeera) has lately been responding to their questions by saying she's innocent, she did nothing wrong, she's shocked that the American authorities, the Department of Justice, the FBI are going after her "for no obvious reasons".

(Those are all direct quotes. Don't just trust us. Check.)

There's an unusually large body of readily-accessible video material in which Ahlam Tamimi, the sociopathic Hamas terrorist, boasts of the murders she executed, reinforcing again and again that she has no regrets and why should she.

Here are some screen shots from just one: it's available via YouTube [here] for anyone wanting to see the whole clip. 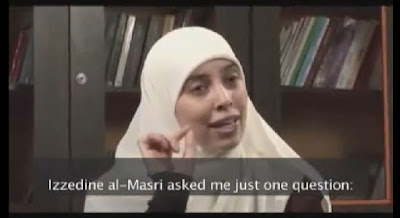 ▲ "Izzedine al-Masri [the human bomb whom she personally brought to the central Jerusalem site she had chosen to destroy] asked me just one question..." 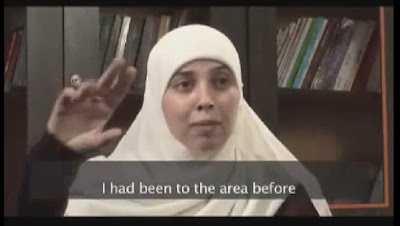 ▲ "I had been to the area before [meaning she had scouted central Jerusalem during the previous week for target-rich sites]..." 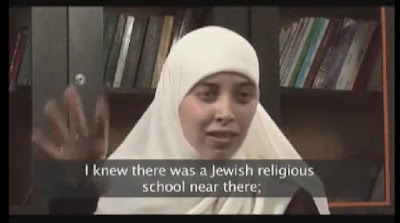 ▲ [And so] "I knew there  was a Jewish religious school near there..." [making it an ideal target for a bombing] 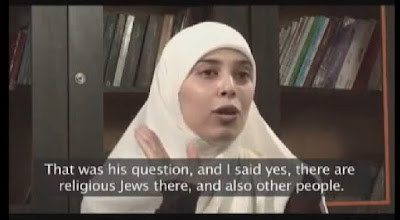 ▲ "That was his question and I said yes, there are religious Jews there, and also other people..." 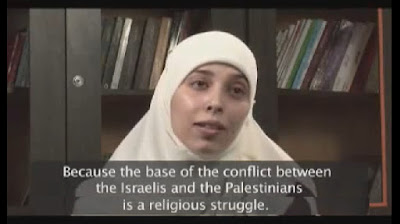 ▲ "[Why did he ask?] Because the base of the conflict between the Israelis and the Palestinians is a religious struggle..."

The video from which these images were extracted is "For the Sake of Allah", produced by the Center for Near East Policy Research headed by investigative journalist David Bedein.

The words are those of Ahlam Tamimi who spoke them in Arabic. In the years that have gone by, no one has pointed to any problems in the Arabic-to-English translation. (Such alleged problems are a popular strategy for defenders of the Palestinian Arab terrorists.) They are, and ought to be taken as, an accurate reflection of what this self-confessed murderer says is her motivation.

For the past 16 years, Ahlam Tamimi has had ample opportunity to state her case publicly. Far from denying any of the mass-murder charges against her, she has basked in the glow of the adulation they have brought her. Those killings are what made her famous, have given her a great, well-funded life, have granted her the status of a pan-Arab celebrity, have made her one of Jordan's precious national treasures and the Tamimi clan's idol. And, for its youngsters, their role model.

To suggest that terrorism like the murderous kind she so proudly practices and encourages is all about "occupation" and "territories" and "national rights of the Palestinians" is to ignore what this deeply and violently hateful woman says to anyone who will listen.

"We only wanted freedom for our country, not to kill Israelis or others for the sake of killing,"

but realize it's contradicted by other well-documented public standpoints of hers like the one in the paragraphs above. Her pretensions to having noble motivations are cynical and purely for effect.

Be aware of some of her better-known public statements, like this one broadcast on Al-Aqsa TV (operated by Hamas, whom she has faithfully served since 2001) on July 12, 2012

"While I was sitting on the bus, the driver turned on the radio. But first, let me tell you about the gradual rise in the number of casualties. While I was on the bus and everybody was congratulating one another, they said on the radio that there had been a martyrdom attack at the Sbarro restaurant, and that three people were killed. I admit that I was a bit disappointed, because I had hoped for a larger toll. Yet when they said 'three dead,' I said: 'Allah be praised.' ...Two minutes later, they said on the radio that the number had increased to five. I wanted to hide my smile, but I just couldn't. Allah be praised, it was great. As the number of dead kept increasing, the passengers were applauding. They didn't even know that I was among them. On the way back [to Ramallah where she was due to read the news on the Istklal TV station that evening], we passed a Palestinian police checkpoint, and the policemen were laughing. One of them stuck his head in and said: 'Congratulations to us all.' Everybody was happy."

Only wanted "freedom"?
Didn't want to kill Israelis?
What actually drives this woman is not so hard to figure out.

In reality, Ahlam Tamimi is as guilty as sin.