This open letter is written by Frimet and Arnold Roth, the parents of Malka Chana Roth, murdered at the age of 15 in the Sbarro massacre.

Thank you. In an exceedingly rare announcement yesterday as Jordan's foreign minister (as well as its deputy prime minister), you spoke publicly and for the record about how the Hashemite kingdom views the request it received officially in March 2017 from the United States to extradite fugitive bomber Ahlam Tamimi to Washington ["14-Mar-17: Sbarro massacre mastermind is now formally charged and her extradition is requested"].

As you know, the US began quietly and without publicity requesting this from Jordan four years before that, starting in 2013. Jordan has refused the entire time.

In simple terms ( and not using the words you used), here is what you conveyed:


Jordan has rejected the US request for some years. We confirm that Jordan still rejects it, no matter what the Americans want.

Tamimi, as you may know, faces charges in a United States federal court for her central role in the Hamas-inspired massacre that took the lives of many people, half of them children. One of those children, Your Excellency, was our daughter Malki who was just fifteen years old.

As her parents, what you have just done is, in a certain way, helpful to our efforts. Let us explain.

You and virtually the entire political leadership of Jordan have been careful to avoid all public mentions of the embarrassing and self-humiliating way Jordan harbors the confessed Sbarro bomber and FBI Most Wanted fugitive terrorist Ahlam Tamimi.

More than most people, and related to what we lost in the Sbarro atrocity, we know how willing you are to discuss Jordan's disavowal of its treaty obligations to the US in private meetings about which we have gotten reports. And how unwilling you are to talk about this important issue in public.
It is quite a balancing act.

You might recall how we tried to draw out your response in an article we published more than two years ago, addressed like this current post, to you personally: "26-Jul-17: We listened carefully to Jordan's foreign minister and we have 10 questions".

And as you may remember, you ignored us totally. (So did and do your staff.)
Special mention of Jordan's ambassador to Washington who right up until today blocks us on Twitter. We assume this is what feeling really embarrassed about an issue will cause even a polite and cultured person like Ambassador Dina Kawar to do.

In the last two weeks, the United States via an official announcement of its foreign ministry, the US State Department, has clarified in a gratifying way its rejection of the Hashemite Kingdom of Jordan's claims that the 1995 Extradition Treaty signed by the late King Hussein and President Bill Clinton's administration is invalid.
You are invited to read what we wrote about that US statement just yesterday: "12-Nov-19: On Jordan, the US and the children killed in a pizzeria".

This is also well reported in the online English-language edition of Haaretz. (You can click here to download the printed version.)

Also yesterday, possibly unwittingly, you spoke as Jordan's Foreign Minister to a public event and put Jordan's position - and presumably your own personal views as well - on the record.

We are pleased that you did. Pleased enough that we want others to know. As many others as possible. And especially the small tribe of US Congressional figures making frequent pilgrimages to Jordan and to its king ["09-Nov-19: Another delegation from US Congress at Jordan's royal court. Did extradition come up?"]

We found your blunt and deliberate words on the popular Jordanian news-site JO24. (We remember it as one of the Jordanian TV channels that lovingly provided Jordanian audiences with real-time, live video coverage of Ahlam Tamimi's wedding to her cousin Nizar on June 16, 2012).


Safadi: We have received US requests to extradite Ahlam al-Tamimi. We confirm our commitment to the law that prevents it (JO24)

The Minister of Foreign Affairs and Emigrants Affairs, Ayman Safadi, said that several US authorities asked Jordan to extradite Jordanian citizen Ahlam Al-Tamimi, pointing out that Jordan respects and abides by the law "and the law does not allow it".
Safadi said during a press conference to talk about the expiry of the annexes of the Wadi Araba agreement related to the areas of Baqoura and Ghamr, on Monday, that Jordan is a state that respects the law. Jordanian law does not allow the extradition of a citizen to a third country and there is no legal basis for the delivery of Ahlam al-Tamimi.
He pointed out that there are requests from US authorities requesting the extradition of Tamimi, "but Jordan deals in accordance with the law and the law does not allow extradition."
In late March 2017, the Court of Cassation upheld a decision by the Amman Court of Appeal to reject Washington's request for the extradition of Ahlam al-Tamimi, accused of involvement in an attack that killed two US citizens in 2001.
Tamimi spent 10 years in Israeli jails after being sentenced to 16 years [might be a machine translation error - see below] in prison for participating in a martyrdom operation of the Izz el-Deen al-Qassam Brigades, the armed wing of Hamas, in the Sbarro restaurant in West Jerusalem in August 2001 in which 15 people were killed and 122 others were injured.
The occupation [a reference to Israel] released Tamimi and handed over to Jordan in 2011 as part of a prisoner exchange deal between Israel and Hamas.
[Source: "Safadi: We have received US requests to extradite Ahlam al-Tamimi. We confirm our commitment to the law that prevents it", JO24, November 12, 2019 - the original article is in Arabic; the English text is via Google Translate]

(For background to the US extradition request, see "03-Nov-19: In Washington, a step towards bringing the Sbarro bomber to justice")

You are the latest in a line of foreign ministers - eight of them so far - to have served Jordan since its absolute monarch King Abdullah II ascended to the throne. You are the first to have publicly expressed, to the best of our knowledge, a frank and open disdain for an entirely proper request made by the United States, your country's most important strategic partner.

We confess to being surprised by how inaccurate your claims are, at least in the form reported by the Jordan media. Naturally, if they misquoted you (which sometimes happens to politicians), we assume you will see to it that the record is fixed.

Meanwhile, on the assumption that what we see does reflect what you said, allow us to point out some of what you got wrong. And some matters that ought to be more on your mind than they seem to be. 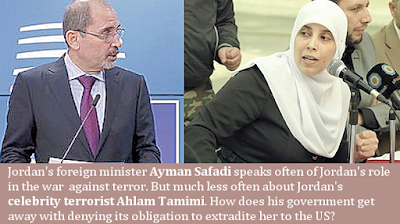 Thank you for clarifying matters.

You have delivered a good basis for the US media to engage with you. Your short speech will help them understand at a deeper level what your published comments mean in the context of US/Jordan relations and the billion dollars that's coming your way in December.

Naturally, we would welcome the opportunity to discuss what we have just placed in front of you.
We would also want to take the opportunity to share with you some things you might not know about the beautiful life of the child whose unbearable loss we continue to mourn.

UPDATE November 14, 2019: The reports of Ayman Safadi, foreign minister of Jordan, speaking clearly for the first time about how Jordan intends to deal with the kingdom's most famous terrorist (after more than two years of carefully maintained public silence) are now widely republished in the Arabic-speaking world. Some examples from the many we have seen this week: