26-Jul-17: We listened carefully to Jordan's foreign minister and we have 10 questions

For reasons that regular readers will know, we watch events in the Hashemite Kingdom of Jordan with more than the usual amount of interest.

Here's an article, under the headline "Jordan sees Israeli reactions to embassy case ‘absurd’" that gets prominence in today's Jordan Times:


AMMAN — A senior official on Tuesday described as “absurd” the Israeli reactions after a diplomat who killed two Jordanians on Sunday arrived back in Israel. Israeli media on Tuesday showed Israeli Prime Minister Benjamin Netanyahu giving a hero’s  welcome to the unidentified embassy staffer who killed a 16-year-old boy and a surgeon.
“Absurd [are] some of the reactions that are coming of Israel which are trying to show this as if the ambassador and the suspect were under siege and were somehow liberated and celebrating them as heroes coming back home. This is really absurd. This is a criminal case and I think it is in everybody’s interest that it is pursued as such,” Foreign Minister Ayman Safadi told CNN in an interview on Tuesday.
Instead, he said, justice should be allowed to take its course, and to respect the fact that two Jordanians were killed, he added.
Safadi said: “Jordan acted legally and morally [by complying to international laws on diplomatic mission]. It is upon Israel to do the same and allow for justice to take its course and to stop provocative behaviours that distort the facts here.
“We respected our obligations under international law because the suspect enjoys diplomatic immunity. We agreed with his statement, which we did and we agreed with the Israelis that he goes back. So Jordan did what it had to do under international law and now  it is incumbent upon Israel to also do what it has to do under the law, which is to allow for the criminal justice to take its course and also to act morally and allow for justice to happen.”
Safadi acknowledged that Jordan’s abidance by international law drew fire domestically, especially from MPs.
“The government is under pressure by deputies because it allowed the Israeli killer to leave,” he said, stressing that the decision had to be taken in this way out of Jordan’s commitments to international conventions.
["Jordan sees Israeli reactions to embassy case ‘absurd’", Jordan Times, July 26, 2017]

Interesting ideas, and some striking expressions that we highlighted. Now we have some questions for Foreign Minister Ayman Safadi.

Does he, and do any of his advisers, consider that the statements bolded in the quoted piece ought to be taken seriously? Or are we to assume this article, along with its self-justifying expressions of utter devotion to treaties, justice, international practices and high standards of morality, is for domestic Jordanian consumption only?

These are deliberately pointed questions given what we know about the brazenly unlawful way the Jordan government has dealt with the case of a confessed murderer and FBI Most Wanted Terrorist by the name of Ahlam Tamimi.

Tamimi is a citizen of Jordan, born, raised and educated there. Nonetheless she calls herself a Palestinian. That's not the biggest of surprises. Between 70% and 80% of Jordanians do that.

Tamimi murdered our daughter Malki in 2001 along with fourteen other victims. She did it by masterminding the plot, carefully selecting the target and planting the bomb - who was a human being with an explosives-filled guitar case on his back.

Taking account of an additional victim who is still unconscious today, 16 years later, Tamimi is legally and morally responsible for sixteen lives destroyed - dozens of families broken, hundreds of people maimed and traumatized.

There are numerous on-line video clips and images of Tamimi laughing (literally) about the murders. She has never expressed a single word of regret about the Jerusalem massacre she masterminded. She admitted proudly and with a smile on her face to all the charges in court. Then she was released in the Shalit deal of 2011 when 1,027 terrorists were freed by Israel in exchange for Gilad Shalit. 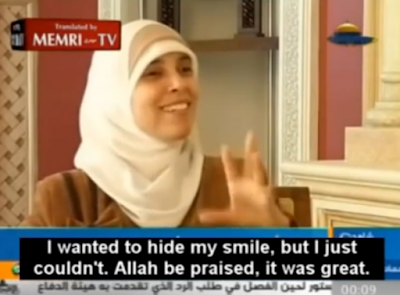 From her birthplace and home in Jordan, she has expressed delight about the people she murdered on dozens of occasions. She has done this in front of Jordanian high school and college students, Jordanian professional guilds and Jordanian women's assemblies.

She had her own globally-distributed made-in-Amman weekly television show for more than four years, in which the redemptive power of "resistance" crimes against Jews and Israelis were the core theme. (The show is still screened weekly but she stopped being its presenter in September 2016 when she was very briefly arrested in Jordan pursuant to an Interpol apprehension notice issued by the US Department of Justice. She was freed the following day, but evidently got advice that appearing weekly on her own terror-glorifying and murder-inciting TV show was temporarily not in her best interests or those of Jordan.)

From her Jordanian base, she has encouraged her audience to follow her example - to kill Jews, to murder Israeli children.

So to our questions to the foreign minister of Jordan:

We're not entirely naive. We assume these questions are going to be ignored as all our previous questions, comments and suggestions to the Jordanian ruling clique have been. We are perfectly aware of how easily voices like ours can be brushed aside.

But we hope to show the minister and his king that brushing aside the questions themselves is going to be less easy.

Mr. Patrick Condell has no Jewish ancestors
and no religion that might cause him to favor Jews.