28-Mar-13: He is acquitted but Prof. Karabus "has no choice but to submit" 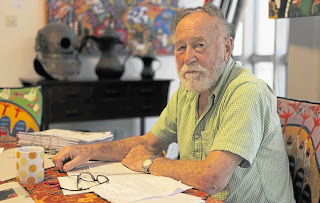 South African newspapers have been reporting for some days that Prof. Cyril Karabus, 77, whose involuntary detention by the people who run the United Arab Emirates has been going on now for seven months in defiance of basic principles of due process, has been cleared, acquitted, found not guilty, freed to go home and so on. The spokesperson for South Africa's Department of International Relations and Co-operation broadcast a tweet a week ago exulting (after the earlier intervention of the department's minister) that "He is free!"


CAPE TOWN - Prosecutors in the United Arab Emirates (UAE) have told Professor Cyril Karabus’ legal team they intend appealing the decision to find him not guilty of manslaughter. Last week, an Abu Dhabi court found the elderly professor not guilty of manslaughter and forgery. A medical committee cleared the paediatric oncologist of all blame for the death of a young cancer patient he treated there more than a decade ago. The latest development means Karabus will remain in the UAE indefinitely...

We have not yet seen any reports originating in the UAE that confirm this, but we will keep looking. And if there is anyone out there still thinking the man's own government is willing to do what ought to be done, think again:


"Professor Cyril Karabus has no choice but to submit to the UAE's legal process, the dept of international relations said on Thursday, after it emerged that he will not be allowed to come back to South Africa yet." [SAPA]

We have posted numerous times here about the Kafkaesque ordeal that this distinguished medico has suffered at the hands of the authorities in the UAE. For a quick overview, we suggest these: "21-Mar-13: Is Prof Karabus finally being released and going home?"; and "29-Jan-13: UAE "Justice" officials fiddle: The scandalous treatment of Prof. Karabus goes on and on".

May we suggest again that anyone planning to travel to or through Dubai should carefully review what we posted here yesterday? See "27-Mar-13: Final call for Australian travelers to London with Qantas". And for the record, the advice is not meant only for Australians.

This outrageous affair is barely known outside South Africa. It's time to change that.

This is good news and I think that someone should prepare a detailed documentation about the career and thought of Professor Karabus for discovering more hidden secrets of this case.