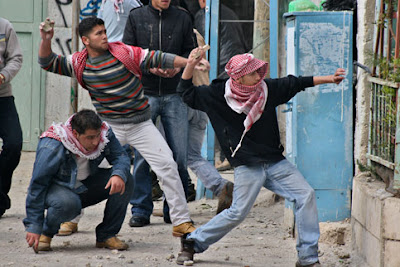 We wrote last week on the mostly-ignored dangers of lethal rock-throwing Arab "youths" (25-Sep-11: "Only" rock throwers - but now a father and his infant son are dead). Now there's published evidence that, statistically, we're experiencing a significant rise in that aspect of the terror warfare being waged against Israeli civil society, its roads and its drivers.

A Haaretz analysis, "Israel Defense Forces: Rock-throwing in West Bank reaches new high", says incidents of deliberate rock-throwing at Israelis rose by 33% last month compared with the monthly average of the past year. There were 498 incidents and two Israeli deaths during September and some 3,484 rock-throwing attacks in Judea and Samaria during the first nine months of 2011. That's 387 per month on  average, up from 303 per month in 2010.

Israel's restraint, both officially and on the part of ordinary Israeli drivers, is extraordinary. By comparison:

Needless to say, the rocks hurled at Israeli drivers are somewhat larger than golfball-size, and considerably more lethal. What's more, the rock-throwers around us here are not bored teenagers out to fill some spare time. A recent AP report points out that "many Palestinian parents see their children as young fighters resisting Israel's occupation of the West Bank. Rock throwing, specifically, is seen as symbolic of their struggle. The issue has flared in the past few years as Palestinians hold weekly demonstrations in West Bank villages in which young men and boys pelt rocks and chunks of concrete at Israeli soldiers."

"The issue has flared" because Arab youths and young men are being urged to do it by their leaders. The Palestinian Authority headed by Mahmoud Abbas has long promoted rock-throwing through its production and distribution of video and music clips adulating the rock-throwers [some examples here]. In their hands, rocks are weapons in every sense, and the targets are civilian Israelis. And resort to those weapons is on the rise.