25-Sep-11: "Only" rock throwers but now a father and his infant son are dead

Two of the constants in this part of the world are (a) the phenomenon of Palestinian Arab men - some young, but not all - hurling rocks at fast-moving Israeli cars; and (b) the wilful but completely dishonest minimization of the deadly threat posed by such attacks. Here's the latest illustration of why this double-headed problem is so serious.

What seemed on Friday to be a routine car accident now turns out to have been an attack by terrorists in the vicinity of the Jewish community of Kiryat Arba. [Source]. The Jerusalem Post reports this evening that police now believe that rock throwing was the cause of the car accident that killed Asher Hillel Palmer, 25, and his one-year-old son Yonatan on Friday. At a court hearing today, counsel for the police said that it now appears the car veered off the road after a rock shattered its  windshield. "The police said that the front window was shattered, and a large rock was found inside the car with Palmer's blood on it. People close to the victims claimed that the police quickly determined it as a car accident in order not to inflame the region."

A young man and his baby son are dead and a family is forever shattered.

It's possible the perpetrators drew inspiration from a highly publicized ambush by masked rock-throwing children of an Israeli in Jerusalem's suburbs last October. You might remember the incident (see video below): the Arab media and especially Al Jazeera presented what happened in their customary Daoud vs Goliath fashion: "innocent" and "meek" Arab schoolboys, armed only with loincloths and slingshots callously run down by aggressive Israeli in his armored Zionist vehicle. The presence of a phalanx of cameramen, clearly positioning themselves at that location because of the expectation that there would be some highly photogenic violence is completely absent from the anti-Israel reporting. Likewise the cynical abuse of Palestinian Arab children by their adults (Arabs) who are at the scene.

Throwing rocks at moving cars is an act of terrorism. Terrorism means the deliberate inflicting of violence on civilians in order to intimidate a population - to paraphrase the United Nations General Assembly's draft Comprehensive Convention on International Terrorism. That's a convention that is highly unlikely ever to be enacted, by the way, given the perpetual opposition to it from the UN's most powerful lobby, the Organization of the Islamic Conference.

Throwing rocks is as deadly as firing a rifle or throwing a grenade. The people who routinely portray rock throwing Palestinian Arabs as liberation warriors in training know this. That's why despicable is too mild a word for scurrilous advocacy/reportage pieces like "Throwing rocks at the occupation – and Western prejudice too" [Electronic Intifada] and "Forget rock-throwing teens. Growing peaceful Palestinian resistance could tip the conflict" [Christian Science Monitor]. 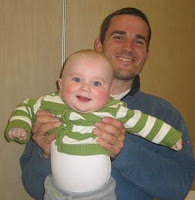 Like some other kinds of terrorists, rock throwing youths can seem like romantic figures - especially when portrayed that way by naive or activist editors - right up until the moment they bring tragedy into your own family or community.

UPDATE 3-Oct-11: We just found this photograph (at left) of the father and son killed by rock-hurling thugs: Asher Hillel Palmer, and his infant son Yonatan Z"L. May their memories serve as a blessing, and may their family find comfort among the mourners of Zion.