18-Dec-07: Will the latest billions encourage Pal-Arab moderation? Not so likely 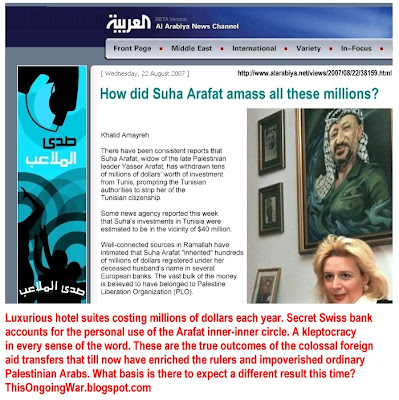 The voice of Palestinian-Arab journalist Khaled Abu Toameh is consistently one of those worth hearing, even as it's ignored by mainstream media and political analysts. Today, as he has done frequently in the past, Abu Toameh delivers some painful insights:

Since its establishment in 1994, the PA has received nearly $6.5 billion in international aid. The assumption was that economic prosperity would weaken radicals and boost the moderates among the Palestinians. But hundreds of millions of dollars went into secret bank accounts or to build villas for senior PA officials.

The international community that was pouring money on the PA did not seem to care about the stories of financial corruption and embezzlement. Nor did the donors pay attention to the fact that Arafat was inciting his people not only against Israel but also against the same "infidels" who were signing his checks.

While the billions of dollars promised at the Paris conference on Monday are likely to improve the living conditions of the Palestinians and strengthen their economy, there is no guarantee that the financial aid will have a moderating effect on many of them.

This money is mainly designed to keep Fatah in power and prevent Hamas from taking over the West Bank. Unless the PA changes its rhetoric and starts promoting real peace and coexistence with Israel, the millions of dollars are not going to create a new generation of moderate Palestinians.

The only way to undermine Hamas is not by channeling billions of dollars to the PA leadership, but by offering the Palestinians a better alternative to the Islamist movement.

And what are other Arab voices saying about the promises of 7.4 billion US dollars over the coming three years? Salam Fayyad, the Palestinian PM, is quoted today saying that the results "exceeded our expectations". Literally - since he had asked for a "mere" 5.6 billion. Hamas called the conference and its outcome "a dangerous conspiracy", "coating poison with honey". A Lebanese paper editorializes that "Like the Lebanese people, the Palestinians have been cursed by years of dismal governance by bunglers and crooks... [and therefore the outcome was] necessary but not sufficient."

And the World Bank, which knows something about economics but evidently very little about what it means to live next door to a terrorist regime, restaurant bombers, self-immolators and assorted religious lunatics, says "the situation will improve only if Israel eases restrictions on the movement of Palestinian people and goods." Simple, really, when you look at it that way.

So sad, so very sad. When people wake up and understand all of this, it might be terribly expensive to repair the damage. Maybe impossible.