11-Sep-13: No need to speculate: Palestinian Arabs genuinely, overwhelmingly believe in barbarism as a strategy


Overall support for violence in the name of Islam has declined among Muslim publics during the past decade... In many of the countries surveyed, clear majorities of Muslims oppose violence in the name of Islam. Indeed, about three-quarters or more in Pakistan (89%), Indonesia (81%), Nigeria (78%) and Tunisia (77%), say suicide bombings or other acts of violence that target civilians are never justified.

But there is one demographic where a clear majority of respondents - 62% - told Pew's pollsters that "suicide bombing is often or sometimes justified". That demographic is Palestinian Arab Muslims. 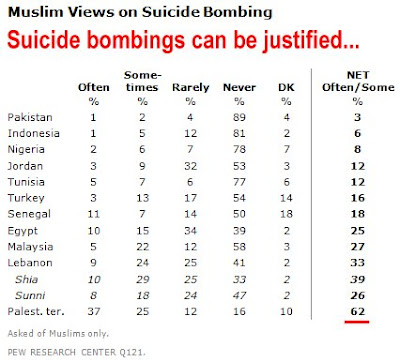 Knowing the murderous intentions of the Palestinian Arab "street" concerning us ordinary Israelis (and keep in mind that Palestinian Arab terror is rarely directed at the Israeli military), it casts a deadly light on the current strategies of the Mahmoud Abbas regime's inner circle.

A report published just yesterday by WAFA, the official mouthpiece of the PA, quotes Yasser Abed Rabbo summing up the 'peace' process currently underway. Abed Rabbo is said to be one of the authors of the 2003 Geneva Accord.

“Israel is trying to benefit from the negotiations to pressure Europe to cancel the boycott (of settlement products),” he said on Voice of Palestine... The negotiations have not made any progress on the ground and that all Israel wants is that no one says anything about its settlements and other activities that violate the rights of the Palestinian people.
“There are no signs of progress... There is progress only in the settlements and in the violations, but not in the negotiations that can cause us to say that US efforts have achieved any real results on the ground or in the peace process..." [Abed Rabbo quoted yesterday by WAFA]

His voice is part of a choir. The Palestinian/Israeli journalist Khaled Abu Toameh writes today on the Gatestone Institute website that -

PLO, Fatah and Palestinian Authority officials have described the talks as "futile", "unproductive", "a waste of time" and "a cover for Israel to pursue its policy of creating new facts on the ground..." By sounding the alarm bell already, the Palestinians are hoping that when the talks fail they will be able to tell the world, "You see, we told you from the beginning that these Israelis do not want peace." But these statements and threats have also proven to be counter-productive. The more Palestinian officials and leaders talk about the "futility" and "ineffectiveness" of the peace talks, the bigger the opposition grows to the negotiations with Israel. [Khaled Abu Toameh on Gatestone Institute website, September 10, 2013]

Nearly two-thirds of the people ruled by the clique of which Abed Rabbo is a leading member are committed to the most extreme forms of lethal terrorist attacks on Israelis. In that light, do we need to speculate about the intended effect when PA insiders like him dismiss so comprehensively the current round of talks between their side and Israel?