11-Oct-11: Living with neighbours who want us all back to the stone age 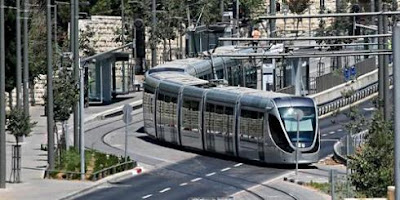 
Jerusalem: Stones hurled at Light Rail, bus  | Stones were hurled Monday at the Light Rail in Jerusalem's Shuafat neighborhood, near the Israel Police National Headquarters. A windowpane was smashed but no injuries were reported. The train drove on to a garage but all the passengers were dropped off at the nearest station, in the French Hill. An alternative train was sent in its place. The Light Rail has been installed with stone-proof windows and therefore despite the smashing of a windowpane a plastic shield managed to prevent any injuries. Almost at the same time, stones were hurled at a bus near the Jaffa Gate in the Old City. The bus driver lost control of the vehicle, hit a wall and consequently sustained light injuries. The passengers were not injured. Jerusalem police have launched a wide-scale search to trace the perpetrators.

It's timely to recall that the deaths of a young father and his year-old child in their vehicle was attributed by the police to a mere road accident two weeks ago (we wrote about it here: "25-Sep-11: "Only" rock throwers - but now a father and his infant son are dead"). But some days later, two Palestinian Arabs were arrested and charged with hurling rocks in an attack that caused the car to crash, as a result of which Asher Palmer and his infant son Yonatan were killed near Kiryat Arba. Police, now under criticism for having originally missed the malicious stoning connection in the Palmer deaths, are investing 17 other cases of stoning attacks on Israeli vehicles involving the same suspects.

Sadly, there is no shortage of stonings (we wrote about this here: "6-Oct-11: Those rock throwing "youths" are proliferating"), or stones or suspects.