24-Oct-10: Lauren Booth has been thinking these things through 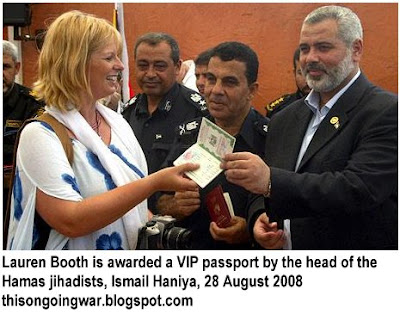 Since we have given attention in these pages to the statements and doings of British former-prime-minister Tony Blair's sister in law (20-Aug-10 Some more things that Hamas is good at and 19-Aug-08: Seven years and the same blind ignorance exacts its price), it's only appropriate that we pass along the latest of her media appearances.


Cherie's sister now a Muslim Tony Blair's sister-in-law has converted to Islam. Lauren Booth, 43, the half-sister of Cherie Blair, says she now wears a hijab when she leaves the house and prays five times a day after a "holy experience" in Iran. Journalist Lauren took the decision six weeks ago after visiting the shrine of Fatima al Masumeh in the city of Qom. She said: "I haven't wanted to touch alcohol," adding that she hoped her conversion would help change former PM Blair's "presumptions" about Islam being a threat. The freshly abstemious Ms Booth is employed by the notorious Iranian media channel, Press TV. We wonder whether this, too, is meant to persuade her brother in law of Islam's non-threatening nature. She's been studying the Koran too. Has gotten all the way up to page 60, she told reporters. This is impressive if you take into account the deep intellect and emotional maturity that have characterized her jihadism-focused actions to date. Ms Booth, though the half-sister of Mrs Blair, rates not a single mention in the former prime minister's 700 page autobiographical study, "The Journey".