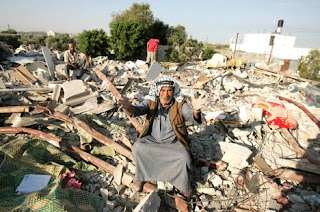 For most of us, most of the time the things we know about life in conflict zones are what the news media choose for us.

The military aspects of this ongoing war of terrorism - in particular the almost-entirely-unreported and incessant bombardment via rockets and missiles of Israeli civilian communities and homes by the jihadists of Gaza - are poorly understood by most people looking in from outside.

This is part of the reason why Israeli policies towards the Hamas regime's terrorists can be criticized so easily. The astonishingly unfounded speech by the new British prime minister speaking in Turkey this week pretty much captures what happens when you have a distorted, politically-motivated sense of the reality going on behind the Islamist curtain. [But only part of  the reason: the Financial Times report of his speech points out that the Cameron speech "won plaudits in Ankara after attacking Israel".]

Two weeks ago (on 17th July) the authoritative Egyptian daily Al-Ahram published a visitor's perceptions of life in Gaza. The startling impressions of Egyptian journalist Ashraf Abu Al-Houl, reporting on stores overflowing with goods, were published in Arabic only. But the excellent MEMRI organization that focuses on translating the Arabic media has now provided an English translation.


A sense of absolute prosperity prevails, as manifested by the grand resorts along and near Gaza's coast. Further, the sight of the merchandise and luxuries filling the Gaza shops amazed me. Merchandise is sold more cheaply than in Egypt...

... Began my search for the truth regarding the siege in Rafah, at the Saturday market, which was loaded with large quantities of merchandise and products of various kinds – at prices mostly lower than in Egypt, particularly for food products. Nevertheless, there weren't many customers, and this for two reasons: One, supply is much greater than demand, and two, the workers were all waiting to get paid their wages. Business owner Abu Yousuf stood at his shop surrounded by hundreds of cans of food. Their price had dropped significantly in the past two months; in some cases by as much as 50%...

Despite the drop in price due to the plethora of goods in the Gaza markets, the residents sense that even lower prices are on the way, due to the easing of the Israeli blockade. The consumers are carefully watching prices, [particularly for] smuggled electrical appliances and cars, and refrain from buying, expecting that merchandise will arrive via the border crossings [leading to a further drop in prices]...

Several months ago, Gaza had only one luxury resort, Zahrat Al-Madain. Today, another one opens up every day, such as Crazy Water, Aqua Park, and Al-Bustan. Most of them are owned by members, or associates, of Hamas. In addition, the Hamas municipalities [also] charge high fees, in Gaza terms, for the use of public beaches.

The whole thing is here.