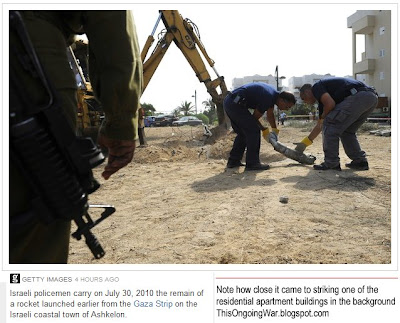 Eight civilians, residents of the southern Israeli city of Ashkelon (population about 120,000), suffered shock this morning when a Palestinian-Gazan-Arab jihadist Grad rocket landed in a populated area in the city, right next to a high-rise apartment building. The Chinese newsagency Xinhua reports that the rocket caused a huge explosion and damaged a building and several cars parking in the area. The Jerusalem Post says it landed in a central, residential area of Ashkelon. Numerous windows of the surrounding, multi-story buildings and vehicles in the area were shattered.
YNet says that an initial military estimate assesses that Hamas was not responsible for this rocket, which was fired from an open area near Beit Hanoun in the northern Gaza Strip.

But the Gazans were not done. A second explosion was heard in the Eshkol region in the past couple of hours (it’s now Friday afternoon). It appears two mortar shells landed in the area. Fortunately, there are no reports of injuries or damage.

The made-in-Russia-or-sometimes-China Grads are a deadly piece of military-grade equipment. Four of them have been fired from Gaza since the end of the Israeli Cast Lead operation in the Gaza Strip in early 2009; 3 exploded in Ashkelon and one in the vicinity of Gan Yavneh. 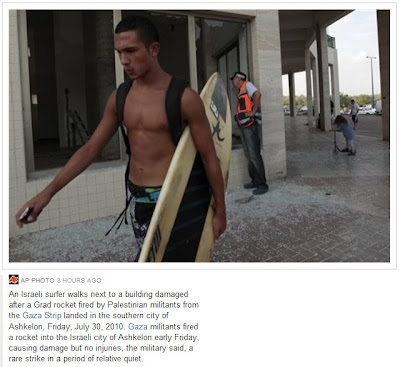 The BBC has given detailed and extensive coverage to today's multiple attacks.

As of this hour (16:00 Israel time, on Friday) there's not a word about today's escalation of terrorism to be found anywhere on the very extensive Middle East pages of BBC World's website.