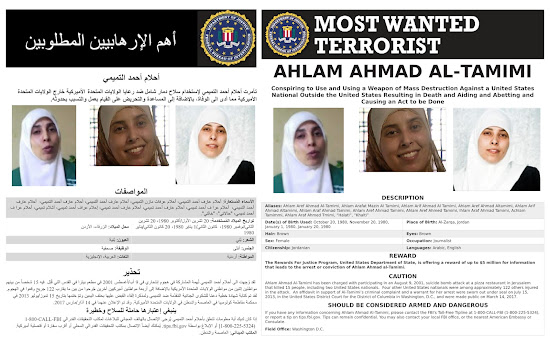 The Tamimi Wanted posters were issued by the Federal Bureau of
Investigation [Image Source] of the US Department of Justice in English and Arabic versions
In less than a month from now, on March 14, 2022, an incredible five years will have passed since the United States charged a Jordanian woman, Ahlam Aref Ahmad Al-Tamimi, with murdering Americans by means of a weapon of mass destruction.
One of those murdered Americans was our daughter Malka Chana Roth, age 15.

Back in 2017, Acting Assistant Attorney General for National Security (at the time) Mary B. McCord, Channing D. Phillips U.S. Attorney for the District of Columbia (at the time) and Assistant Director in Charge of the FBI’s Washington Field Office (at the time) Andrew Vale made the announcement.

“Al-Tamimi is an unrepentant terrorist who admitted to her role in a deadly terrorist bombing that injured and killed numerous innocent victims. Two Americans were killed and four injured. The charges unsealed today serve as a reminder that when terrorists target Americans anywhere in the world, we will never forget – and we will continue to seek to ensure that they are held accountable,” said Acting Assistant Attorney General McCord. “I want to thank the many dedicated agents and prosecutors who have worked on this investigation.”

“We have never forgotten the American and non-American victims of this awful terrorist attack,” said U.S. Attorney Phillips. “We will continue to remain vigilant until Ahlam Aref Ahmad Al-Tamimi is brought to justice.”

“Al-Tamimi is a terrorist who participated in an attack that killed United States citizens,” said Assistant Director in Charge Vale. “The bombing that she planned and assisted in carrying out on innocent people, including children, furthered the mission of a designated terrorist organization. The FBI continues to work with our international partners to combat terrorists like Al-Tamimi and hold them accountable”...

The investigation into this matter was conducted by the FBI’s Washington Field Office. The Office of International Affairs of the Department of Justice’s Criminal Division provided significant assistance. The case is being prosecuted by the U.S. Attorney’s Office for the District of Columbia and the National Security Division’s Counterterrorism Section.

The determination of the most important law enforcement agencies in the United States was clear and unambiguous. We wrote at the time ["15-Mar-17: Sbarro and justice"] that

Obviously, justice is very much on our minds right now. In fact, that has been consistently true since August 9, 2001.

But we were also aware that much still needed to be done and we said so. However what followed, notwithstanding the use of the clear words “We have never forgotten the American and non-American victims of this awful terrorist attack”, was and remains far more challenging than we suspected back then.

First, as we wrote in a tweet earlier today, thanks to the Hashemite Kingdom of Jordan, the bomber, one of only 25 individuals named as FBI Most Wanted terrorists, remains free today. What's more, she continues to actively encourage more terror.

Who allowed this to happen? Who, if anyone (apart from the families of the Jordanian woman's victims) is outraged by it? 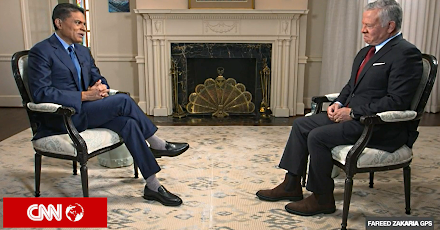 As parents of one of the bomber's many child victims, we're exasperated by the passivity - sometimes calculating, often ignorant - of a long list of officials, politicians, community leaders and media figures.
CNN's Fareed Zakaria is among the most puzzling of them, though far from the only news industry professional about whom we have serious questions that we prefer not to share at this stage. Let's simply observe that not one of his several exclusive interviews with Jordan's king has ever touched on the kingdom's harboring of the world's most wanted female terrorist.

That kind of high-profile tip-toeing around an explosive issue, along with the kid-gloves treatment Jordan gets right across the media, is a large part of why justice in the Tamimi/Jordan case has been thwarted for so long.

We're now serving notice, as we wrote in our Twitter account today, on those we have tried over and again to engage in this pursuit of justice.

Our message: If you aren't demanding publicly now that Jordan extradite the blood-drenched @Sbarro bomber to Washington, you're standing with her. And standing with the woman who says she has never regretted what she did at the Sbarro pizzeria is disgraceful.

I do not regret what happened. Absolutely not. This is the path. I dedicated myself to Jihad for the sake of Allah, and Allah granted me success. You know how many casualties there were [in the 2001 attack on the Sbarro pizzeria]. This was made possible by Allah. Do you want me to denounce what I did? That's out of the question. I would do it again today, and in the same manner. [Source Video]

And for those out there who don't run community organizations or departments of major governments or edit great metropolitan newspapers or their Internet-era equivalents, what you can do - and we seriously hope you will no matter what country's citizenship you hold - is sign our petition.

Please - we seriously need all the help we can get.