21-Feb-18: News industry activism, its tendentious outcomes and the Tamimis

We've been busy the last few days responding to social media comments - some supportive, some critical, a lot of it disgustingly hateful - about Ahed Tamimi, a close relative and unabashed admirer of our child's murderer Ahlam Tamimi ["Ahed Tamimi and Her Family Aren't the Palestinian Saints You Want Them to Be", Haaretz].

Our Twitter account [here] has had orders of magnitude more traffic in the past week than we have seen before.

Yesterday, we saw that Sophie McNeill [background], whom we have never met and with whom we never had any conversation or email, had filed her own report on the Ahed phenomenon for Australia's ABC News. The ABC's site calls Sophie McNeill "a video-journalist based in the Middle East for the ABC". It doesn't mention that she's based in Jerusalem (or so we have been told) which is where we live.

Given the loaded nature of the issues in the ongoing Tamimi saga, it's a shabby and tendentious job of reporting and analyzing news.

Honest Reporting yesterday highlighted an outrageous problem with it - unprofessional recklessness or perhaps something much worse - that ought to have generated a fire-storm of controversy in the Australian media. But hasn't.

Here's how it starts:


On February 20, Australia’s 7.30 current affairs program on national broadcaster ABC included a ten minute segment on the Ahed Tamimi case. In the report, it appears that video footage of Tamimi has been deliberately cut mid-sentence to alter the impression that Tamimi was inciting violence – a key allegation in her trial... Not surprising given that the segment was put together by Sophie McNeill, who has a history of advocacy journalism and vilifying Israel. ["ABC’s Sophie McNeill Selectively Cuts Ahed Tamimi Video", Simon Plosker, February 20, 2018]

We aired our views some weeks back on the significance of what was yesterday excised from the Ahed Tamimi ABC record: see "04-Feb-18: The embarrassing violence of Ahed Tamimi and its fig-leafers". It's hard to understand anyone trying to get away with analyzing the Ahed Tamimi story without paying close attention to the violent things she actually said for the record. And that she intended to be heard since it was her mother holding the camera and urging her to unload. And who then published it.

There's nothing especially new in angry allegations of bias concerning Ms McNeill. Honest Reporting, among others, raised what seem to us to be serious and valid concerns when she first got the job: see "Should ABC News Have Given Advocacy Journalist the Keys to its Jerusalem Bureau?". The concerns are highlighted by a look at Section 4 of the ABC's own Code of Practice:


The ABC has a statutory duty to ensure that the gathering and presentation of news and information is impartial according to the recognised standards of objective journalism.


does not show a clear record of separating her media career from her activism. And there is little doubt that her activism continues and influences her reporting in terms of how she frames stories, particularly about the conflict between Israel and the Palestinians.

Like her ABC Jerusalem bureau predecessors, Sophie McNeill could have done - but didn't ever do - a report that ties the conflict, the controversies, the human dimension of events here in Israel with her home market of Australia by doing a story on the Malki Foundation.

As many who read our blog know, we created the foundation in 2001 in the weeks after the murder of our Melbourne-born daughter Malki. It does wonderful, non-sectarian work and positively impacts on people's lives. More than that, it's worth pointing out that there is zero political dimension to its activity. In fact, people familiar with it have often commented that the Malki Foundation is exemplary in the way it provides benefits to a needy segment of the population in Israel without any regard for the political views, religion or ethnicity of the beneficiaries - of whom there are many thousands (roughly one-third are Arabs).

Ms McNeill was invited to interview us founders at a charity benefit hosted by the then-ambassador of Australia to Israel in his official Herzliya residence in the summer of 2015. We were told at the time that she had accepted. But she failed to show up on the night and the interview never happened. Nor did she ever try after that (or before) to contact us. Her privilege, of course.

Now her time here is drawing to a close. An Australian Jewish News report in December said


ABC’S controversial Israel correspondent Sophie McNeill is set to move back to Australia to join Four Corners next year. McNeil has been the focus of several complaints from Jewish communal leaders, and politicians, since she became the ABC’s Middle East correspondent in 2015.

Yesterday, for what we therefore assume will be the first and last time, Ms McNeill included a reference to our murdered daughter in one of her reports - the one on Ahed Tamimi who joyously danced at the wedding of her adored cousin, Malki's killer.

Concerning our daughter, here verbatim is the little that Ms McNeill and the ABC said about our Malki yesterday:


Israeli activists have long accused the Tamimi's of condoning violence, pointing to a cousin of Ms Tamimi's father, who was jailed 17 years ago for aiding a suicide bomber who killed 15 Israeli civilians in 2001 — including a 15-year-old who held Australian citizenship.

Just one sentence. Our comments: 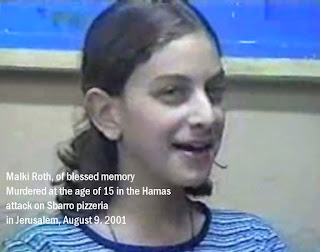 We're not totally unrealistic. We realize that few people have the intensity of concern that we do about Malki's life and her murder. And that there might be very little interest in the story among the Australian news-consuming public. Those aren't our concerns. The pursuit of justice, never a quick process, continues to keep us focused and active, but has always gotten less media attention than we would have liked.

But the Sophie McNeill phenomenon goes well beyond our private feelings. The ABC is one of Australia's most influential and significant national institutions. You don't have to be, to use Ms McNeill's inappropriate term, an Israeli activist to be outraged at the soft-pedaling she does on those who see value and even redemption in Palestinian Arab terrorism as the Tamimi clan do.

She's entitled to her private ideological agenda - that goes without saying. But ABC management ought to be open enough and genuinely committed enough to the values of world-class journalism to know when to step in and object to brazen crusading, distortion and obvious manipulation of the news record. That's just outrageous.

In this latest case, they weren't and they aren't ready to act as far as we can tell and there are many losers as a result. And yes, of course we would have been glad to put these views to their Jerusalem correspondent if she had ever made contact.

UPDATE February 27, 2018: We decided to put up a post that revisits an unpleasant chain of experiences we had with the ABC back in the period immediately after our daughter's murder in a Hamas attack, and then again a couple of years later. See "27-Feb-18: On Australia's ABC and being unbalanced"

This quick blog post refutes the latest
insanity from the Jewish Far-Left:

FOR PURIM: Refuting the Fans of Vashti: