"an Arab resident of Hevron in Judea was arrested Tuesday morning after he attempted to sneak a knife into the Tomb of the Patriarchs (Maarat Hamachpela). Border Police officers arrested the teen, roughly 15 years of age, after they discovered the weapon at a checkpoint outside of the tomb, a Border Police spokesperson said. The suspect approached the checkpoint at one of the entrances to the Tomb of the Patriarchs, but before he could enter the site the suspect was asked to lift his shirt after he aroused the suspicions of the officers operating the checkpoint. Officers spotted the handle of a knife the suspect had concealed, and ordered him to surrender. The suspect drew the knife, but was arrested after officers drew their weapons and repeated their demand that he surrender. No shots were fired and no injuries reported."

Another child, another knife, another bloodless intercept by fast-thinking security personnel of the IDF even as the child prepared to slash and stab.

The version pushed today by the notorious Ma'an News Agency has a very different feel to it. It starts with a quotation from an Israel Police source:


A 15-year-old Palestinian boy was detained Tuesday morning at a military checkpoint near the Ibrahimi mosque in the southern occupied West Bank city of Hebron, alleging that the child had a knife hidden under his clothes. Luba al-Samri wrote in a statement that the boy was taken for interrogation and added that "no human casualties were reported." She claimed the incident marked the third time in six days that Israeli forces arrested Palestinian minors attempting to pass through Israeli checkpoints with knives in their possession.

(We are surprised by the mention of two other such thwarted attacks. If we can find more information about them, we will add it to this post.)

For all the genocidal intentions routinely attributed to Israel's military, the indisputable fact is the child armed with a knife concealed under his shirt today is alive. This could have easily ended up with an entirely different outcome for him and his family.

Naturally the manipulative, European-funded editors at Ma'an don't allow that to get in the way of another blood libel:


Rights groups have disputed Israel's version of events in a number of cases, also denouncing what they have termed as a "shoot-to-kill" policy against alleged attackers who did not constitute a threat at the time of their death, or who could have been subdued in a non-lethal manner -- amid a backdrop of impunity for Israeli forces who have committed the killings... [Ma'an, today]

Naturally, being in the all-propaganda-all-the-time business, the Ma'an people fail to mention the open incitement to stabbings that have become a prominent feature of the Palestinian Arab establishment's messaging to its public throughout the past two years.

Widely circulated posters like these, putting stabbers on a pedestal and encouraging lethal knifings of ordinary Israelis, set the tone that enables the ongoing weaponization of their badly educated, intensively indoctrinated children: 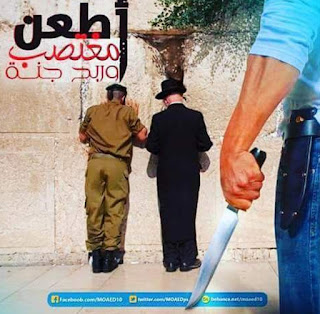 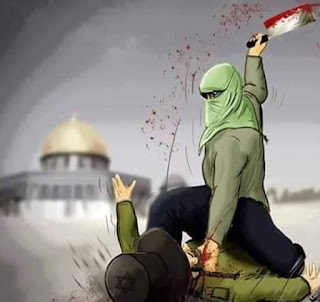 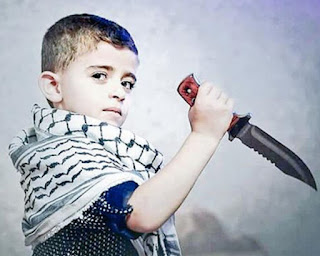 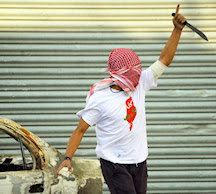 These are merely sample images from a vast, growing catalogue of malevolence intended to incite and inspire young Arabs to murder Israelis. It's a campaign that owes much of its lethality and destructive power to a deeply-felt sense of victimhood, self-pity and grievance that plays a central role in the Palestinian Arab narrative and consciousness.

Deeply-felt it may be. But it's also false and contrived - and cynically leveraged by an unpopular PA leadership vainly clinging to power and relevance.

Writing in The Atlantic two years ago, at about the point when the current and ongoing knifing/stabbing/vehicle-ramming/shooting campaign against Israelis was gathering steam, Jeffrey Goldberg observed ["The Paranoid, Supremacist Roots of the Stabbing Intifada", The Atlantic, October 16, 2015]:

When violence against Jews occurs inside Israel, or on the West Bank, a consensus tends to be reached quickly by outside analysts and political leaders, one that holds that such violence represents the inevitable consequence of Israel’s occupation and settlement of Palestinian territory. John Kerry, the U.S. secretary of state, said in an appearance earlier this week at Harvard that, “What’s happening is that unless we get going, a two-state solution could conceivably be stolen from everybody. And there’s been a massive increase in settlements over the course of the last years.” He went on to say, “Now you have this violence because there’s a frustration that is growing, and a frustration among Israelis who don’t see any movement.”
The violence... encouraged by purveyors of rumors who now have both Israeli and Palestinian blood on their hands, is rooted not in Israeli settlement policy, but in a worldview that dismisses the national and religious rights of Jews. There will not be peace between Israelis and Palestinians so long as parties on both sides of the conflict continue to deny the national and religious rights of the other. [Goldberg in The Atlantic]

He might have added that violence of the kind we saw today - children equipped with knives and blood lust - is part of a wide, ugly and almost entirely unreported (outside of Israeli channels) program of child weaponization that is encouraged and guided from the highest levels of the Palestinian Arab power pyramid.

And megaphoned by the likes of Ma'an, enabled - it has to be said - by their European and American funders (Denmark, Sweden, the United States, Netherlands, the United Kingdom and others as well as major NGOs including UNESCO, UNDP, Arab Human Rights Fund, Catholic Relief Services and Save the Children) without whose cash infusions they simply could not engage in their vile practices.

UPDATE Thursday September 14, 2017: Here's something we have learned about the claim made in the Ma'an report above that this was "the third time in six days that Israeli forces arrested Palestinian minors attempting to pass through Israeli checkpoints with knives in their possession." The following appears in "Attempted stabbing thwarted near Hebron, attacker shot", published by Times of Israel yesterday (13-Sep-17):

"On Friday, a Palestinian man in his twenties was arrested in Hebron when he was discovered to be hiding a knife on his person, while last Wednesday Border Police officers arrested a Palestinian teenager in the West Bank city after finding a knife in his possession. Both of those incidents also took place at checkpoints near the Tomb of the Patriarchs."

So one attacker in his twenties, a second who is a teen.