19-Mar-17: A thought about Jordan and its treaty obligations

Stephen M. Flatow whose daughter Aliza was murdered in a Palestinian Arab Islamic Jihad human bomb attack on an Israeli bus in 1995, has an op ed on the web site of the Jewish Press today ["Jordan Protects A Killer Of Americans – Where’s The Outrage In Washington?", March 19, 2017].


The Trump administration has revealed that four years ago the U.S. secretly indicted a Palestinian-Jordanian terrorist who was involved in the murders of American citizens.
So why is Jordan still refusing to hand over the killer? The case involves Ahlam al-Tamimi, a Palestinian terrorist with Jordanian citizenship. In August 2001, she played a major role in the bombing of a Sbarro Pizzeria in Jerusalem. Fifteen people were killed – including American citizens Malki Roth and Shoshana Greenbaum – and four Americans were among the 122 people who were injured. Tamimi was captured by Israel, tried, and convicted, but served just eight years in prison before being released in an Israel-Hamas prisoner exchange. She then became the host of a television show in Jordan, and has boasted on air about her role in the Sbarro massacre...
Sure, it’s good that Ahlam al-Tamimi is now on America’s Most Wanted list. But when will the Palestinian killers of some 142 other Americans be added to the list?
More important, when is the U.S. government finally going to put meaningful pressure on those who shelter killers of Americans? The U.S. gave Jordan $393 million in aid last year. Is that just a blank check? Or is it time, perhaps, to make some of that aid conditional on Jordan surrendering killers of Americans?

The whole article is worth a few more moments of reading, here.

We posted this brief comment, below, on the article's page:


This shabby chapter in US/Jordan relations provides a good opportunity to recall that Jordan, with a population whose majority defines itself as Palestinian Arab, is and functions as another Palestinian entity - one arm of a three-sided structure that includes the Fatah/PA regime and the Hamas entity in Gaza.

Mr Flatow's question ought to be echoed in many of Washington's corridors of power: With hundreds of US aid dollars flowing into its coffers annually, can Jordan be granted a blank check to do what's convenient for a Saudi ruling clan (the Hashemites) that aspires to keep holding onto a desert kingdom filled with self-styled Palestinians and their blood lust?

Or will it honor its treaty obligations and hand the savage smiling murderer of Americans - including the murder of our fifteen year old daughter Malki - to extradition and the US justice system?

It ought to be carefully explained to Jordan that answering that question the wrong way brings on uncomfortable penalties.

The photo at the top of this page is little-known. It comes from an online photo collection, Demotix, that is no longer on line. We archived it, fortunately, when it was still up.

In case you thought the Jordanians were embarrassed by the return of a mass murdering Jordanian woman, released from prison via an act of open extortion (the Shalit deal) and destined to spend her days in the shadows and fringes of Jordanian society, think again.

The photo shows a scene from a high-profile Jordanian reception for the happy murderer a day after she was released from her Israeli prison cell (October 18, 2011) and arrived back to her home-land via a brief stop-over in Cairo. This photo was taken on October 19, 2011.

And where was this glossy event conduction? The reception to honor the barbaric savage who explicitly sought to kill as many Jewish mothers and children as possible took place inside Jordan's Family Court complex in Amman. Whether or not they understand this, the authorities in Jordan were sending a repugnant message about law, order, decency, public endorsements and above all their view of the morality of blowing Jewish children to bits.

The Jordanian authorities, despite their thin protestations to the contrary, have never had a problem giving Ahlam Tamimi appropriate public platforms from which to give expression to her celebrity-murderer status. If there's even a one of them who's embarrassed by how this impacts on their moral standing, they're continuing to do a first-rate job of hiding it.

Below is the full page Demotix image from which the photo above was extracted. 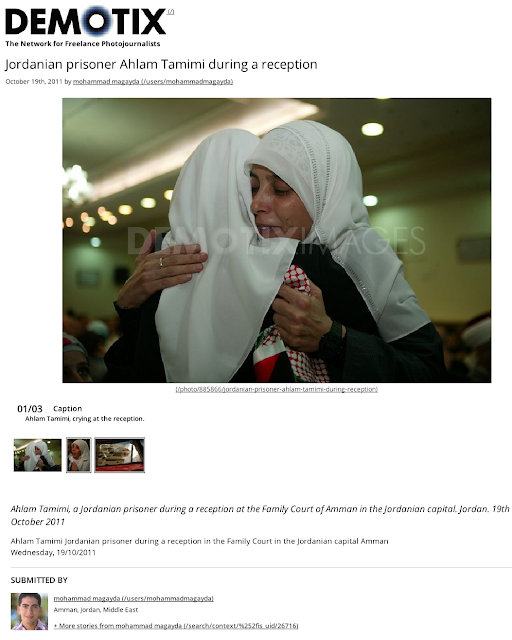 So far, Jordan has experienced no consequences for harbouring this ghoul.

That the Obama Administration did nothing with this indictment is, of course, no surprise.

But as far as I know, the US Congress has not made many waves either.

If Congress does not show some "cojones" and withhold all aid money to the Jordanians until they turn over Ahlam Tamimi, they will always plead poverty and dire circumstances.

This time, Congress has to take an uncompromising stand and shut off the money valve until Ahlam Tamimi is behind bars in the US.