14-Mar-17: Will Jordan's lust for dead Jewish children cause problems with the US?

This being a blog about terrorism and those who do it, we tend to write often about despicable people.

We profiled an especially vile killer of seven Jewish girls on a 1997 school-trip in yesterday's post ["12-Mar-17: What a Jordanian hero and his admirers tell us about the likelihood of peace"]. He's not smart, he's certainly not brave, he was said by his family to have been insane at the time he did the sickening things that got him sent to prison in 1997. And he has never ever uttered a syllable that suggests he did wrong and regrets it.

Quite the opposite: as soon as he was set free on Sunday and "driven home in a convoy of dozens of cars whose drivers were honking their horns, a video shared on social media showed" [source], Ahmad Musa Mustafa Daqamseh launched into a series of public statements via the media most of which has gone unreported in the more civilized parts of the world. (Almost all the reports are in Arabic.)

For instance, Daqamseh declared (according to Aljazeera - here's MEMRI's transcript and video) that we Israelis are “human waste” that must be eradicated. That the rest of the world vomited us up and now we need to be eliminated "by fire or by burial". And that if that's not done by the hands of the cheering crowds standing around him as he said this, then "the task will fall on the future generations to do.”

Now put yourself into the shoes of a Jordanian leader. Perhaps a Member of Parliament. Or a prominent journalist. What would you want people to know about where you stand on the matters addressed by the newly-freed thug? How embarrassed would you be that so many of your citizens are openly rejoicing at the man's release and at the crimes he committed?

Wonder no more:
What must it be like to live in a country with leaders of that calibre? With such widespread popular support of your neighbours' children? [Click here for our previous posts tagged with "Jordan".]

So how is it that Jordan keeps being lauded in the State Department's annual survey of terrorism? State's June 2015 "Country Reports on Terrorism" annual survey says of the Hashemite Kingdom:


Jordan remained a key ally and a model partner in combating terrorism and extremist ideology... Jordan demonstrated regional leadership in the fight against ISIL... and participated fully on the diplomatic, political, financial, and military fronts... Jordanian prisons have a religiously based de-radicalization program that seeks to re-engage violent extremist inmates into the non-violent mainstream of their faith.

Jordan legislated its first anti-terrorism law in 2006, a year after a series of terrorist bomb blasts at three Amman hotels that killed dozens of people.


Under the new law, penalties for terrorist acts range from 10 years in prison to the death penalty, and the definition of terrorism has been expanded to include any act meant to create sedition, harm property or jeopardise international relations, or to use the Internet or media outlets to promote "terrorist" thinking. [Aljazeera, April 25, 2014]

That law has since undergone changes (summarized in this April 2014 AFP syndicated report). But what the State Department report fails to mention is how Jordan has carefully defined terror over the years so that acts of violence directed at Israelis are specifically, by definition, never to be considered terror. For instance:


Convention for the Suppression of the Financing of Terrorism of 1999 (Ratified 28 Aug. 2003): "Jordan does not consider national armed struggle and fighting foreign occupation in the exercise of people’s right to self-determination as terrorist acts under art. 2(1)(b)" [Source] 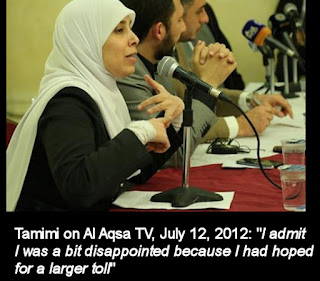 Jordan's creativity with the definition of terror is not new and hardly a secret, but largely ignored. So too the wildly popular support that terror when directed at Israelis enjoys among Jordanians.

The quiet celebrity lifestyle enjoyed by Ahlam Tamimi, who delivered the bomb to the Sbarro pizzeria in August 2001, can be happening only because the kingdom and its leaders are fine with that.

From within Jordan's borders and regularly venturing beyond them, Tamimi speaks widely and often as an honored guest.
She speaks at its universities, professional guilds, law courts and other venues; records her television program "Naseem Al Ahrar" (translation: “Breezes of the Free”) week after week. Or rather she did until about November 2016 - and then she seems to have stopped appearing though the program continues. The show has been beamed out to the Arabic-speaking world since 2012 giving its presenter the status of a genuine pan-Arab celebrity.
Tamimi has boasted repeatedly of her central role in the Sbarro pizzeria massacre. She has zero remorse. The Jordanians seem to love her for it.

Should the US government be fine with that too?