21-Jun-16: Martyrs, rocks and firebombs: Scenes from an Israeli highway

There are two major highways that connect Jerusalem with the coastal plain, Ben Gurion Airport and the Tel Aviv area. One is Highway One, currently undergoing a multi-billion shekel enlargement and refurbishment. The other is Route 443.

In the early hours of this morning. according to an Agence France-Presse (AFP) report quoting Israeli security officials, a gang of Palestinian Arabs hurled bottles, rocks and incendiary Molotov Cocktails at fast-moving vehicles on Route 443.


"An initial review suggests that as the mob continued, nearby forces acted in order to protect the additional passing vehicles from immediate danger and fired towards the assailants," a military statement said. "Forces confirmed hits resulting in the death of one of the attackers. At the moment I am aware of one other attacker that was wounded and treated by medical forces and later evacuated to hospital. Two additional suspects were arrested." [AFP via Times of India - today]

Though the AFP reporter says this happened "near the village of Beit Sira", the description suggests to us it happened where the highway passes just below the village of Beit Ur El Fauqua, population around 1,000 people. (An Israel National News report reaches the same conclusion this morning.) We ourselves have been hit by rocks while driving past that spot, as have many of our friends in the neighbourhood. It has a reputation as a source of lethal violence.

Several vehicles driving in the early hours of Tuesday morning were damaged as a result of the Arab attack. Ynet's report says of the victims:


An Israeli and two foreigners in their twenties were lightly injured and taken to Shaare Zedek Medical Center overnight Monday when rocks and Molotov Cocktails were hurled at a passing vehicle on Route 443. The terrorists also poured oil on the main road... IDF forces were called to the scene and shot at the terrorists, killing one of them and moderately-seriously wounding four others. Three were evacuated to a government hospital in Ramallah while the other was taken to Hadassah Ein Karem. Two suspects were arrested and taken in by the security forces for investigation.

Associated Press, unwisely (having regard to decades of Arab news-reporting history - this sort of partial and biased journalism didn't exactly begin yesterday) basing itself on an Arab version of events, says


"A Palestinian official says a 14-year-old Palestinian boy has been shot dead by Israeli troops. Wagie Ahmad, head of the Beit Our local council in the West Bank, says Mahmoud Badran was killed and four others were wounded early on Tuesday when their car was fired upon by a military patrol. The Ramallah hospital says another person was moderately wounded and three were lightly wounded. The Israeli military had no immediate response. Israeli media says the shooting took place after rocks were hurled at Israeli vehicles, wounding three." 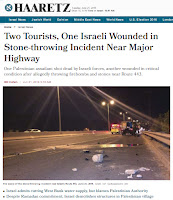 Haaretz, no stranger to bizarre manipulation of facts if there's a greater need, offers this headline: "Two Tourists, One Israeli Wounded in Stone-throwing Incident Near Major Highway". The vehicles that were hit and damaged were on the major highway. So were the victims. The only part of this that was near the major highway was the gang of thugs with the firebombs, bucket of oil, rocks and evil murderous intentions. That's an odd reason to choose that way of describing where this attack happened.

The editors and reporters at the Palestinian Ma'an news service, not so surprisingly, have a substantially different version of who did what to whom.


"Israeli forces shot and killed a 15-year-old Palestinian [they offer a photo] and injured four other Palestinian teens early Tuesday morning in the village of Beit Ur al-Tahta in the central occupied West Bank, after they reportedly threw stones and Molotov cocktails at Israeli settlers, lightly injuring them.
The Palestinian Ministry of Health confirmed the death of Mahmoud Raafat Badran, and added that three of the Palestinian minors sustained serious injuries after being shot by Israeli forces in the head and chest, and were evacuated to Palestine Medical Complex in Ramallah City.
Initial reports said the fourth teen was taken to an unidentified Israeli hospital, but it was revealed later by Palestinian medical sources that he was detained by Israeli forces for interrogation.
Local sources in Beit Ur al-Tahta identified the three being treated in Ramallah as Dawood Isam Kharroub, his brother Muhammad, and Ahd Ikram Suleiman.
Local Palestinian sources said five teenage Palestinians were travelling in a car between Beit Ur al-Tahta and the nearby village of Beit Sira west of Ramallah when Israeli forces “showered” the vehicle with live fire, killing one and injuring four."

Amid the conflicting claims, we can safely express total confidence that the dead Palestinian Arab is either already a designated "martyr" or being upgraded to one at this very minute.

UPDATE Tuesday at 12:30 pm: Haaretz has an updated report now.


Palestinian Killed in Stone-throwing Incident Near Major Highway Was Likely a Bystander, IDF Says | 15-year-old Palestinian was killed and four were Palestinians wounded, three seriously, after two tourists and one Israeli were wounded along Israel's Route 443 | The 15-year-old Palestinian killed by Israeli military fire during a stone-throwing incident along a major highway was apparently a bystander near the site of the original incident, according to an IDF press release. According to the army, he was traveling by car with his family, according to an initial report conducted by the army that was released Tuesday morning. The investigation reported that stones and a firebomb were thrown at the highway leading from Jerusalem to Modi’in, near the village of Beit Sira, around 1 A.M. Oil was also spilled on the highway. The stones injured an Israeli citizen travelling on a bus as well as two tourists travelling by car. An officer and some soldiers from the Kfir Brigade serving in the vicinity were passing through. They noticed the injured and launched a hunt for the stone throwers. Gunfire was errantly shot at the car, in which the boy was a passenger, killing him, according to the report. Others wounded by gunfire were evacuated to a Ramallah hospital. The army still has been unable to say whether the injured include passers-by shot by accident or people connected to the stone throwing. The army said the investigation into the incident would continue in the Binyamin regional battalion serving in the Ramallah area.


From Reuters: "Israeli troops mistakenly killed a Palestinian bystander on Tuesday while responding with gunfire to a petrol bomb and rock attack on Israeli vehicles in the occupied West Bank, the military said. An earlier statement from the military had identified the Palestinian as an assailant. The mayor of his village said he was a 15-year-old. The military said several Palestinians threw petrol bombs and stones at vehicles, injuring three civilians, on a highway between Tel Aviv and Jerusalem that traverses the West Bank... Troops gave chase and "after an initial inquiry, it appears that uninvolved bystanders were mistakenly hit during the pursuit," a military spokeswoman said, identifying one of them as the Palestinian killed in the incident. She said the military had opened an investigation... Abdul Karim Kassem, head of the local council of the Palestinian village of Beit Ore-Tahta, told Reuters that Mahmoud Badran, the teenager killed in the incident on Highway 443, was in a car with other passengers "returning from a pool in a village near us when they came under fire". Another Palestinian was wounded by Israeli gunfire and taken to hospital in the West Bank city of Ramallah. The military said two additional suspects were arrested.

Who is the dead 20-year old mentioned in the AFP report above? At this point, anyone's guess.