10-Jan-16: Yet another terror cell uncovered and captured in Hebron 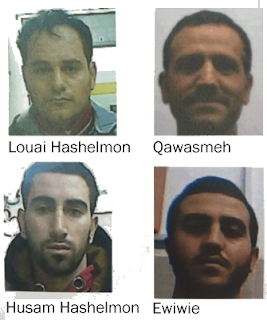 Details were released today of the discovery and capture of a Hebron-area terror squad that sought to carry out one or more Arab-on-Israeli shooting attacks. For that purpose, its members had equipped themselves with lethal equipment including at least one M-16 rifle.

(The last such discovery and capture was just a few days ago, also in Hebron.)

A joint Shin Bet-IDF operation brought the cell's activities to an end in November and its members are in custody. The four names publicized today are Mehmed Ali Qawasmeh, 38; Amr Mehmed Ewiwie, 29; Louai Faisal Hashelmon, 32; Husam Fakhri Hashelmon, 24. All are charged with being part of the terror cell and were indicted for conspiracy to commit voluntary manslaughter and for being members of Hamas, an illegal organization.

The authorities are not saying whether there are others not yet named, though that is the subject of speculation in the media today.

Times of Israel adds that Mehmed Ali Qawasmeh, the leader of this latest-to-be-discovered terror cell and the one who recruited the others, is


the brother of one of the terrorists responsible for the kidnapping and murder of three Israeli teenagers in summer 2014, the Shin Bet says.

As we noted in a recent post ["11-Dec-15: The price of the Shalit Deal and the countries that help it keep rising"]


Wasim Qawasmeh, a resident of Hebron and one of numerous Qawasmehs to be mentioned in this blog over the years for their passion for murdering Jews, was recruited by Hamas in Malaysia...

And so have numerous other Qawasmehs.