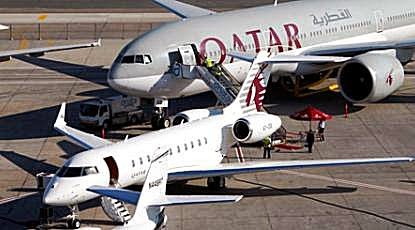 Newsweek a few hours ago on a judgement-call many would see as bordering on the bizarre:

The United Nations Secretary General, Ban Ki-moon, is flying to the Middle East, on a trip to promote a ceasefire between Israel and Hamas, in a private jet financed by Qatar, the chief ally of the Gaza-based terror group.
Ban began his tour of regional Middle East capitals in Doha, Qatar, where he landed Sunday to denounce what he called the “appalling” operation that Israel conducted over the weekend in the neighborhood of Sajaiya, near Gaza City. It was the first time in two weeks that Ban did not mention rocket or other attacks against Israelis, which Jerusalem cites as its reason for entering Gaza. Ban was in Cairo Monday, and was scheduled to visit Jerusalem and Ramallah Tuesday.
When asked about Ban’s travel arrangements, his spokesman, Stephane Dujarric, said on Monday, “It was the Qatari government [that] very generously chartered a plane for the secretary general to enable him to go about his visit." Speaking to reporters from Cairo, Dujarric added, "This is not the kind of visit he could do if he was not flying on a private plane.”

Qatar, an absolute monarchy whose affairs are conducted in accordance with the "strict Wahhabi interpretation of Islam" is frequently said to have the character of a family business controlled by one family, the Al Thanis, as much as it has the nature of a state. The Democracy Index describes Qatar as an "authoritarian regime" with a score of 3.18 out of ten, putting it 138th out of the 167 countries covered. It's also the home of Al Jazeera. And did we mention that, by reason of being located on top of vast deposits of oil and gas, it is the wealthiest state in the world per capita?

Finally, a memo to Mr Ban's spokesman, Stephane Dujarric: In order to avoid any potentially unpleasant encounters with the media today, you might find some helpful background in these three sources: "Qatar’s ceasefire offer adopts most Hamas demands" [Times of Israel, July 19, 2014]; "Qatar and Hamas: A dangerous link" [Yisrael Hayom, July 21, 2014]; "How the Middle East has gone cool towards Qatar" [BBC, March 10, 2014].