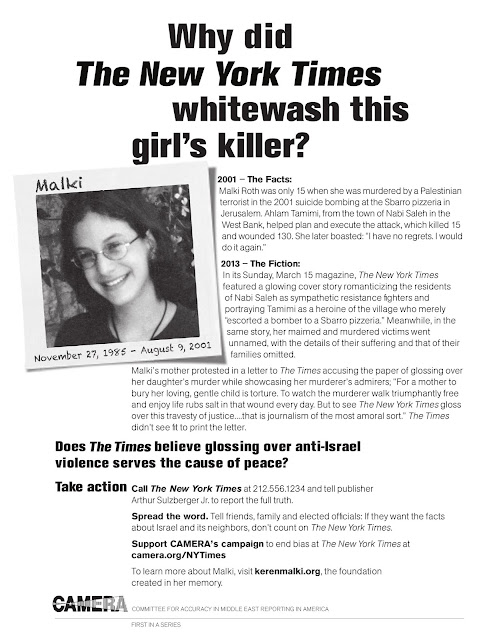 Readers in the New York area may see the advertisement above in their newspapers today. It's the work of CAMERA, the Committee for Accuracy in Middle East Reporting in America, a media-monitoring and research group that promotes accurate and balanced coverage of Israel and the Middle East. It's also an organization whose work we have come to know and greatly respect over the past twelve years. (Today happens to be exactly twelve years since the murderous attack by Hamas terrorists on the Sbarro pizza restaurant in Jerusalem.)

The CAMERA ad, part of a new campaign, mentions a letter written by Frimet Roth to the editors of the New York Times that, in their wisdom, they decided not to publish. The background to that letter, and the text of the letter itself, are in an item we posted here five months ago. We are republishing it below for those who missed it.

30-Mar-13: "To see the NY Times gloss over this travesty of justice is journalism of the most amoral sort"

The editors of the New York Times Magazine chose two weeks ago to publish a partisan, tendentious and extraordinarily selective piece of advocacy journalism about the village of Nabi Saleh. Located a few kilometers north of our home in Jerusalem, it's a place that holds significance for us since almost all its residents share the same surname: Tamimi.

One of those Tamimis is the person who engineered the massacre of women and children in which our much-loved child Malki was murdered at the age of fifteen in August 2001 at Jerusalem's Sbarro restaurant.

We published a response to that article ["17-Mar-13: A little village in the hills, and the monsters it spawns"]. It evoked a response beyond anything else we have written before: many thousands of views here on our blog; thousands more on several other magazines and blogs that cross-posted it on their sites.

The editors of the New York Times did not respond to it.  Nor did they react to a letter that Frimet submitted to them ten days ago. Tomorrow's New York Times Magazine is now online, and with it the letters (3 of them) that the editors have chosen to publish. We assume they received many more. We're confident none would have spoken in the voice of a mother whose child was brutally killed by a woman from the village whose promoters revel in the use of the bogus descriptor "non-violent". It's the allegednon-violence of the village and its people that underpins the article's premise.

Here below is the letter Frimet submitted - and that was rejected at the New York Times. Please consider passing it along to your friends, particularly those friends who read the Times and fall victim to its highly selective presentation - over many years - of the realities of the conflict between the Arabs and Israel.

Ben Ehrenreich's article ["Is This Where the Third Intifada Will Start?"] is a brazen quest for confirmation of his preconceptions about the Palestinian Israeli conflict: politics blended with fantasy and embellished with every tear-jerking cliche in the book. Smiling, frolicking children; poetic "activists"; generous hostesses plying their delicacies at every turn. It is a bucolic scene that is frequently painted in anti-Israel publications. But how does the NY Times publish a piece that plays so fast and loose with fact and history?

Sadly, I am well-equipped to offer some corrections and details omitted by Ehrenreich.

Ahlam Tamimi, the villager whom Ehrenreich described as a woman who "escorted a suicide bomber", is in fact the self-confessed engineer and planner of a bloody terrorist attack. By her own account and after several scouting forays, Tamimi selected a target: the Sbarro restaurant in the heart of Jerusalem, on a hot August afternoon in 2001.

Tamimi has said she chose it because she knew it would be teeming at the appointed hour with women and children. She transported the bomb, enhanced with nails and bolts to maximize the carnage, from Ramallah across the Qalandia security checkpoint and into Israel’s capital. Israeli soldiers still waived females through without inspection in those days.

Tamimi and her weapon, the bomber, both dressed in Western garb and chatting in English to appear as tourists, strolled through the city center. At the entrance to Sbarro, she briefed him on where and when to detonate, instructing that he wait 15 minutes to allow her a safe getaway.  Fifteen men, women and children were murdered that afternoon. My teenage daughter Malki was among them. Ehrenreich, who writes warmly about Nabi Saleh’s children, displays a cold detachment when relating to the bombing’s victims, the youngest of whom was two years old: “Fifteen people were killed, eight of them minors.”

Tamimi, on the other hand, has focused hard on the children. Filmed in an Israeli prison, she smiled broadly when an interviewer informed her that 8 children were murdered, and not merely the 3 she had known about. Since her release in the 2011 Gilad Shalit deal, Tamimi has repeatedly and publicly boasted of her deed, adding: "I have no regrets. I would do it again."

Tamimi has always lived in Amman, other than two years in Nabi Saleh while attending university. Israel ‘exiled’ (to adopt Ehrenreich’s term) her to Jordan where her father and brothers reside. Since her release she married another Tamimi, also a convicted murderer freed in the Shalit deal. He too is a home-town hero in Nabi Saleh. The host of her own weekly show on Hamas TV, she travels freely throughout the Arab world to address her many fans, accepting accolades and trophies while urging others to follow in her footsteps.

For a mother to bury her loving, gentle child is torture. To watch the murderer walk triumphantly free and enjoy life rubs salt into that wound every day. But to see the NY Times gloss over this travesty of justice with a cover story that showcases this woman’s many admirers in Nabi Saleh – that is journalism of the most amoral sort. You ought to be ashamed of it.

We would be grateful if you would also consider referring those friends to the op-ed ["17-Mar-13: A little village in the hills, and the monsters it spawns"] we posted here two weeks ago in the immediate wake of the NYT Magazine cover story.

POSTSCRIPT: Regular readers of the New York Times may recall that its editors provided an unsurpassed platform, and sickening prominence, to our daughter's murderer six years ago when she was still a prisoner serving multiple life terms (these days, she is out, free as a bird and newly married). We wrote about it here: "28-Jun-07: About sweet-faced young women", "5-Jul-07: A Balance of Views?" and "7-Jul-07: A Palestinian Terrorist". We were as outraged then as today by the ease with which they slid past the grotesque acts for which this woman and her fellow child-killers were responsible, and in which the citizens of bucolic Nabi Saleh take such unconcealed pride.