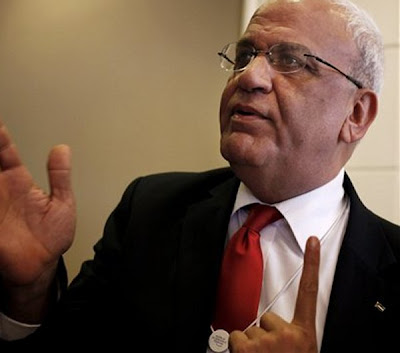 Keep in mind the list of "preconditions" for negotiations that Mahmoud Abbas, the 'president' of the PA's statelet proclaimed and that we quoted in our previous post ["27-May-13: Quote of the week: Abduct hostages? That's not the Palestinian Arab way, except when it is"]


Palestinian chief negotiator, Saeb Erekat, speaks to the Associated Press at the World Economic Forum in Southern Shuneh, 34 miles (55 kilometers) southeast of Amman, Jordan, Saturday, May 26, 2013. Erekat reacting to Israeli President Shimon Peres' call at the World Economic Forum in Jordan for a resumption of peace talks said he hoped that President Peres can convince the Israeli Prime Minister Benjamin Netanyahu of the two-state solution which envisions the establishment of an independent Palestinian state. "Now is the time to make peace and not talk about peace," Erekat said. (AP Photo/Mohammad Hannon)

A pity those editors did not confront Erekat, a man with a creative knack for massaging his side's positions and declarations, with one or two of the Abbas quotes we mentioned earlier.