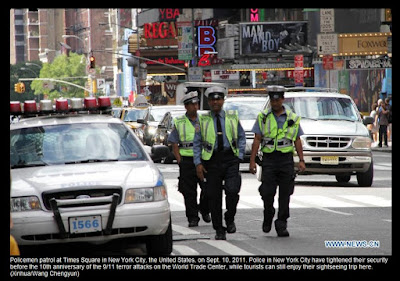 It's election season in the United States and Israel and a dangerous time to be taking leads from political figures whose public pronouncements, in too many cases, turn slightly nutty and more than usually self-serving at times like these. The same can be said for political commentators whose analyses are too often calibrated to meet the requirements of those same election campaigns.

Case in point and an instance of the current cup-is-half-full irresponsible silliness: Michael Hirsh, writing in the National Journal, for which he is chief correspondent, last week: "One Year After Bin Laden's Death: A New World":


If Osama bin Laden were still alive today, one year after he was killed in a U.S. raid, he would hardly recognize the world he knew. Nor would he see the supposed "clash of civilizations" that he tried so hard to foment over two decades of violent jihad. Instead bin Laden would see Islamist radicals on the election stump in emerging governments in Egypt and Tunisia, pledging cooperation with senior U.S. officials, and even meeting with a few neocons in Washington. He would see a U.S. administration that, having killed most of bin Laden’s confederates, is now ready to move into a post-al-Qaida era and engage with Islamist politicians as long as they renounce violence and terrorism. He would see Islamist parties that are passionately pursuing power and vested interests within their own countries (Egypt, Libya, Tunisia) rather than against bin Laden’s old “far enemy,” the United States.

Elsewhere, on the same day, the same writer ("Can Obama Safely Embrace Islamists?") blogging on the same journal's blog, extrapolated from there by quoting with approval from a pronouncement that issued forth from an Obama administration official:


It is no longer the case, in other words, that every Islamist is seen as a potential accessory to terrorists. "The war on terror is over," one senior State Department official who works on Mideast issues told me. "Now that we have killed most of al Qaida, now that people have come to see legitimate means of expression, people who once might have gone into al Qaida see an opportunity for a legitimate Islamism."

He goes on to momentarily acknowledge that "true, a deep skepticism is in order when it comes to the longer-term program of radical Islamist groups". But having dismissed that concern, he quickly shoves the skepticism roughly aside and encourages his readers to prepare themselves properly for an era of blue skies, happy days and productive dialogue with the hitherto bigoted, vicious and fanatic Islamicists, freshly metamorphosed into democrats and statesmen.

Lest we take him too seriously, Hirsh also identifies what he calls "dependable (if inadvertent) allies in the United States" of Bin Laden and his fellow Islamist mass-murderers. The people he means (and names) turn out to be certain syndicated North American media commentators he calls "right-wing conservatives". The notion that they can be called "allies" of the arch-terrorists in polite circles is simply repugnant. We'll leave it at that.

It's hard for those of us who see the Islamicists from much closer to be other than cynical and somewhat bitter about the approach of people like the man from the National Journal. We're not so confident of our political smartness to say that Bin Laden's vision of a re-emergent Islamic caliphate is becoming real in front of our eyes, though others do; for instance "The Realization of Osama bin Laden's Dream", published this past week.

"The Next Chapter of Global Jihad", also published this week by the Brookings Institution, gives this striking assessment of post-Bin Laden Al-Qaeda:


"Their intent to strike U.S. interests and the U.S. homeland has not changed... The increasing democratization of science and technology down to the individual level has emerging implications... Increased transparency, sharing, and technological advances are providing even more operational options to redefine tactics, select and surveil targets, move money, and execute attacks. In this next chapter of global jihad it turns out that the light at the end of the tunnel leads to another tunnel."

Later today (Thursday), as part of the first anniversary of the killing of Bin Laden in an impressive U.S. Navy SEAL operation in Pakistan, a trove of papers found in his compound is going to be released. We're as interested as the next person to know what's there, but we are troubled by how so much emphasis is being placed on the now-deceased Osama Bin Laden as if he were the physical embodiment of terrorism, jihadism and Islamicism. He was one of its leaders. But we need to acknowledge that its forces remain in place. They certainly did not die in that blaze of SEAL bullets. Some say they are diminishing or, like Mr Hirsh above, that they are embracing democracy and soccer. We think differently.

For this reason, it's gratifying to see an interesting poll report this week that shows US voters are generally not buying the "happy post-terror days are here again" meme. Issued this past Monday, and headlined "Only 11% Think War on Terror Is Over", the Rasmussen Report finds that


"just 11% of Likely U.S. Voters think the war on terror is over. Seventy-nine percent (79%) say that war, declared after the September 11, 2001 terrorist attacks on America, is not over... Voters overwhelmingly reject the idea that the war on terror is over one year after the death of 9/11 mastermind Osama bin Laden, although most feel his al Qaeda terrorist group is weaker today. But a majority also still thinks a terrorist attack is possible in the next year."

On the whole, we think it's right to remain worried and watchful. If we're not, then we are going to have to find creative ways to pigeon hole such ongoing issues as these below or else keep our heads firmly buried in the sand:
So is the war on terror really over, as the Obama State Department official quoted above says? It's a question that we don't see as political so much as it's of the existential, actual-life-and-death kind. The name of this blog tells you how we think it's going.