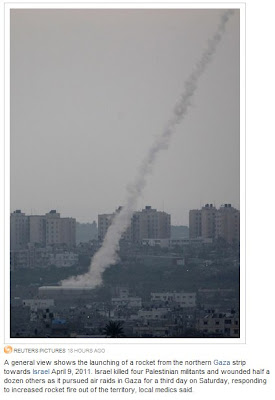 Two mortar shells fired from northern Gaza landed in the Eshkol region around an hour ago (2:30pm Sunday afternoon). Then about half an hour ago according to Ynet, around 3:15 this afternoon, a Qassam rocket, also fired from northern Gaza, crashed and exploded in south of Ashkelon. The Color Red alert was sounded before the second explosion, and again, thank Heavens, it appears there were neither injuries nor damage.