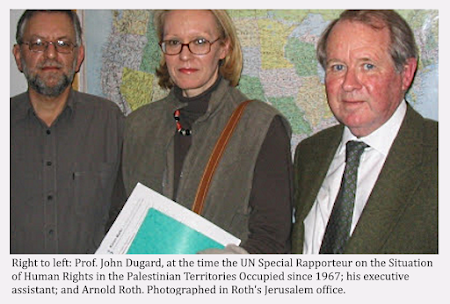 I spent nearly an hour in a private meeting in my office with Prof. John Dugard and his associate, another UN human rights specialist, on their visit to Jerusalem in February 2005.

It was an unofficial visit. I have absolutely no official positions, and it's my understanding that the government of Israel decided some years ago to decline to participate in official meetings with a man whose job title is itself an exemplification of prejudiced one-sidedness, partiality and agenda-driven advocacy.

It was hard for me to know what to expect from a man whose business card gives this as his job title: Special Rapporteur on the Situation of Human Rights in the Palestinian Territories Occupied since 1967.

Dugard's role, in simple terms, involves looking exclusively at one side of a multi-sided conflict.

That's why I felt the most useful thing I could do in our get-together was to speak with him about how life looks from the viewpoint of the thousands of Israeli families like mine who have suffered the death of a loved one by a hate-driven act of Palestinian Arab terror. If you're not already aware, my daughter Malki was murdered in a Hamas action in the center of Jerusalem in 2001. (See this background piece, The Sbarro Restaurant Massacre, on the website of the Malki Foundation.)

Dugard's reports are the basis for innumerable official statements of the General Assembly and of many of the countries who sit there. So I expected to hear the views of an expert - a man who really knows his subject.

He's erudite and talks well and smoothly, no doubt about it. In the course of about an hour of conversation, I learned some interesting things about how he does his job. Then we came to the end of our meeting, and he thanked me for making the time to meet. He very politely expressed appreciation that I had decided to share some views with him. And then, with no evident sign of realizing the impact on me, he said he had never met an Israeli victim of terror before.

And our meeting was over.

I recall that his words and expression were strikingly cold. But in the six years since Malki was murdered, I've come to understand the faces that public figures sometimes feel they have to show when doing their official duties.

Those final words of Dugard, apart from their impact on me, were helpful in letting me put some perspective around the agenda-driven statements we all hear from people in high places. They sound like they know their subject but they are frequently as ill-informed as the most prejudiced partisan.

Since his visit here and our meeting, I have closely read some of Dugard's many reports and speeches as well as compilations (by invaluable watchdogs like Eye on the UN) of some of the outrageous and partisan pronouncements he's made about Israel's position and policies in this ongoing war. And I have come to the conclusion he meant what he said. The Israeli side, for him, truly is terra incognita. Completely unknown and mostly not understood.

I wish the people who get his reports realized this.

UN rules prevent Dugard from having another term in that job with the surreal title. We understand his final report is going to be delivered verbally to the UN Human Rights Council some time in the next few weeks.
But some of its content is already known via an advance publication on a UN website.

"Common sense [writes Dugard] dictates that a distinction must be drawn between acts of mindless terror and acts committed in the course of a war of national liberation against military occupation. Such acts must be understood as being a painful but inevitable consequence of occupation... Israel exploits the present international fear of terrorism to the full. But this will not solve the Palestinian problem. Israel must address the occupation and the violation of human rights and international humanitarian law it engenders, and not invoke the justification of terrorism as a distraction, as a pretext for failure to confront the root cause of Palestinian violence - the occupation."

Perhaps it follows that when you give a man half a job-title, you end up with a half-baked analysis. As a white South African, Dugard might be excused for framing conflicts in terms of the one of which he was part, the one he knows best. But with his one-eye-open, one-eye-closed view of the war of the Jihadists against the Jews, it's inexcusable that he seems to know nothing (to cite just one instance) about the role of Arafat, Fatah and the so-called fedayeen at a time (1966 for example) when the total size of the territory he calls "Israeli-occupied" was zero.

If we're wrong, and if Dugard really does know about those matters, about the role they played and play today, about the deep roots of hatred and of jihadism and of terrorism by Arabs in this ongoing war against Israelis and Jews, then his fatuous, simplistic wrap-up and resort to a discredited "root cause" is a disgrace to him and to those who gave him the job.