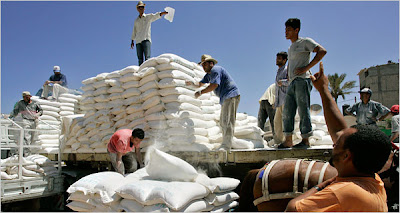 We're grateful to the Sandbox blog for this latest example of the wild and unchecked/unsubstantiated claims being made in the name of Gaza's humanitarian crisis.

Under the headline "Ending the Stranglehold on Gaza", the Boston Globe ran an op-ed this past weekend written by Eyad al-Sarraj, a founder of the Gaza Community Mental Health Program and Sara Roy, a professor at Harvard's Center for Middle Eastern Studies.

Just to be clear about the sources: al-Sarraj's highly politicized office hosted a delegation of European Parliamentarians in 2005, describing to them the “psychological violence” waged by Israel in Gaza (clearly the source of all Gaza's problems) and helpfully campaigned for economic and academic boycotts of Israel. Sara Roy, termed "one of the foremost scholars on the economy in Gaza" has worked in the Gaza Strip and West Bank since 1985 and writes extensively on the Palestinian economy.

The key point in the article is this claim -

Although Gaza daily requires 680,000 tons of flour to feed its population, Israel had cut this to 90 tons per day by November 2007, a reduction of 99 percent.

Heartless Israeli child-starvers at it again.

But wait a minute. Gaza's population is said to be 1.5 million. Doesn't it follow that 680,000 tons of flour a day means every man, woman and child consumes almost half a ton of flour? Per day.

"A typographical error at the Boston Globe?

"Hardly. The two authors used the same "statistic" in an earlier piece. They copied it from an article published in the Ahram Weekly last November, which reported that "the price of a bag of flour has risen 80 per cent, because of the 680,000 tonnes the Gaza Strip needs daily, only 90 tonnes are permitted to enter." Sarraj and Roy added the bit about this being "a reduction of 99 percent." Note how an absurd and impossible "statistic" has made its way up the media feeding chain. It begins in an Egyptian newspaper, is cycled through a Palestinian activist, is submitted under the shared byline of a Harvard "research scholar," and finally appears in the Boston Globe, whose editors apparently can't do basic math. Now, in a viral contagion, this spreads across the Internet, where that "reduction of 99 percent" becomes a well-attested fact. What's the truth? I see from a 2007 UN document that Gaza consumes 450 tons of flour daily. The Palestinian Ministry of Economy, according to another source, puts daily consumption at 350 tons. So the figure for total consumption retailed by Sarraj and Roy is off by more than three orders of magnitude, i.e. a factor of 1,000. No doubt, there's less flour shipped from Israel into Gaza--maybe it's those rocket barrages from Gaza into Israel?--but even if it's only the 90 tons claimed by Sarraj and Roy, it isn't anything near a "reduction of 99 percent." Unfortunately, if readers are going to remember one dramatic "statistic" from this op-ed, this one is it--and it's a lie."

There may be a correction on the way (the authors have international reputations) but the damage is done, just another powerful and ugly defamation to add to a long list.

Sandbox calls this an illustration of the difference between a "political economist" and an economist. Sadly, there's far more of this sort of "political reportage" than reportage going on right now. It's hard to blame the reporters. Sticking to the facts means going counter to a compelling narrative of Palestinian suffering and of photogenic school-children in darkened rooms and holding candles.

We're pleased to note that despite the tsunami of politically-correct but factually-woeful stories emanating from Gaza, once in a while there's a feature that actually captures what the jihadist leadership are doing, day after day, to their land, to their communities and to their children. Read Spiegel's article on the world's largest cemetery: Graveyard Shift for Islamic Jihad: A Visit to a Gaza Rocket Factory. And then think for a moment what the energy and intelligence of the terrorists depicted in it might have achieved for Gaza's Palestinian-Arabs under a religious, political and moral leadership different from the catastrophic Hamas jihadists.