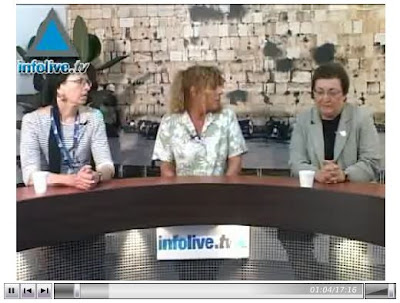 It's one of the most vexing issues of the day in this country - does it make sense to open the gates of Israeli jails and release convicted Palestinian Arab prisoners now. And if yes, what do people hope is going to be achieved by it?

This afternoon, Infolive.tv posted a streaming video [here] of a debate, moderated by journalist Margot Dudkevitch, between two women with quite different viewpoints on this life-and-death question.

One is Naomi Hazan, a respected professor of political science and previously a member, on behalf of a very left-wing party, of Israel's parliament, the Knesset.

The other is Frimet Roth, one of this blog's two authors and the mother of Malki who was murdered in the Hamas terror attack on Jerusalem's Sbarro restaurant in August 2001.

This being Israel, the debate is a lot closer to the bone than the abstract sort of airey-fairy discussion that sometimes goes on in other places. One of the names being touted for release in the current initiative happens to be that of a convicted murderer who was involved in the murder of our daughter.

Prof. Hazan has very definite views about whether and why that convicted felon ought to go free now, right now. (And about whether he's actually a political prisoner.)

Frimet Roth has a different position.

The streaming video of the debate is here.

From AP: "Israeli fire struck a Gaza City house, killing four people, including a 12-year-old boy, medics said. Witnesses said militants were seen in the area. Five militants were killed in fighting with the Israelis in another outlying part of the city, Palestinians said."

And you wonder why the Palestinians hate you?

Some top notch commentary, anonymous. The Palestinians have no one to blame but themselves for their current situation. While it is tragic that the 12-year old boy was killed, this is what happens when terrorists hide and operate amongst civilians. If the Palestinians had even the most basic sense of human decency and respect, they would abide by the laws of war, don uniforms, and face the IDF head on. Of course, they would be crushed immediately, so instead, they hide amongst the civilian populace, forcing Israel to attack in areas where there could be collateral damage. I suppose you would just have Israel sit back and do nothing as its cities are attacked by thugs and cowards.

And you wonder why Israel had to raid a part of the Gaza Strip. Here's a clue, as you're evidently puzzled:

Israel is being attacked from Gaza, on a weekly, and sometimes daily basis. Israel fights to defend its citizens. It has a legal and moral obligation to do so, as would any other country in the world.

If the attacks from unoccupied Gaza stopped, so would the raids. Does the IDF raid towns in Egypt? Jordan? Syria? No, because Egypt and Jordan etc are not attacking Israeli citizens.

If the attacks from Gaza stop, there'll be no need for the raids.

I don't wonder why the Palestinians hate Israel. But I do wonder why the world doesn't hate the Jordanians and the Lebanese when THEY defend themselves against murder squads.

Jordan and Lebanaon have not occupied another people's lands for 40 years and treated the locals like subhumans.

Its very easy to turn your pradigm on its head and say that palestinian attacks against Israel are merely retaliation for Israel's attacks against Palestine. Until both the Israelis and the Paelstinians are willing to share blame for this madness theer can be no peace. This seems to be a position you are unable to accept; ie. you seem to be of the mindset that Israel can do no wrong and always acts on the defense (total BS).


In any case, Israel makes lief for the Palestinians cruel on a adaily basis not as a response to "terrorism" but in order to break the Palestinian will; something that if you study history you will know rarely works.

"Jordan and Lebanaon have not occupied another people's lands for 40 years and treated the locals like subhumans."

You mean other than keeping Palestinians in refugee camps for decades and massacring them occasionally? Yeah, that's treating them well.

Palestinian attacks against Israel are almost always against civilian targets. There has been daily rocket fire at Sderot and other Israeli towns near Gaza since Israel pulled out in 2005. You CANNOT compare these attacks against civilians to the IDF rooting out terrorists hiding amongst civilians in Gaza and West Bank. These actions are not morally equivalent, no matter how much you, Steven Spielberg, and the rest of the Western media want to think so.

You're absolutely right, anonymous, the Jordanians only killed between 7000 and 8000 Palestinian civilians and drove the PLO out of the country...

I believe in some Arab states it's known as 'the era of regrettable events'. What would it be known as if it had been the Jews killing 8000 civilians in that space of time? Something rather harsher I presume, for we all know that what is allowed to other Arabs is forbidden for the Jews.

Why don't the Palestinians put your theory to the test? Why don't they cease the rocket attacks and attempted suicide bombings for two months, and then we will all be able to see that Israel does indeed act from a sense of naked aggression.

What would they have to lose? They might even get this famous 'State' they are struggling so hard to achieve!

Every time the Palestinians have stated they are willing to negotiate the Israelis claim they have nobody to negotiate with.

Every time the Palestinians have tried non violence Israel increases the settlements.

The apologists for Israel here may deny that Israel is an imperialist nation seeking to expand the land under Jewish control (remember Ben Gurion, from the Nile to the Euphrates!) but the rest of the civilized world does not.

As to the rest of the "rebuttals", is any nation other than Israel occupying the land where the Palestinian refugees came from? NOPE. Nice try but you're pathetic bias and hypocricy is so evident it makes civilized human beings ill.