28-May-07: The ongoing tragedy of dead Palestinian-Arab children 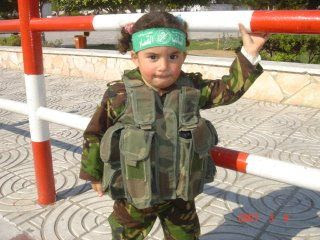 Like many pro-Israel websites and blogs, we get a steady stream of anonymous crank-mail, hate-mail and weird-mail.

Paraphrasing a recurring theme in these often-incoherent letters, we're asked "Hey, Arab children are dying at the hands of the Israelis so how come you people only ever write about Arabs attacking Israelis?" But in language a good deal less sanitized than this.

So for that handful of nameless mail writers, here's an opportunity to reflect on the tragedy unfolding in Palestinian-Arab society... the tragedy of two generations of that society's youth being manipulated and cajoled to literally commit suicide. 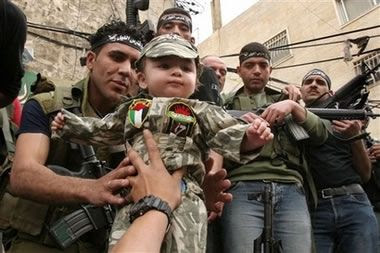 The unspeakable perversion is not a secret and there's no doubt who is doing it: their own "religious" "leaders", their own community elders and even their own parents. History has no parallel for this perversion.

Official Hamas TV began showing a new video clip for children this past Sunday. An analysis by
Itamar Marcus and Barbara Crook of PMW has brought the video's existence to the attention of people like us who don't tune in each night to that particular channel. To call the clip sickening is to miss the point. This satanic work tells you most of what you need to know in order to understand why Arab hatred of Jews and of Israel has endured for decades and centuries.

Following a young Palestinian boy from childhood directly to martyrdom, it begins with him attending a mosque, reading from the Quran, then (in a logical progression that non-Moslems will find breathtakingly sick) holding a rifle with the Quran while imagining himself engaged in violent acts. A minute later, he's a mature Hamas fighter participating in battle against Israel. And right after that, he's dead. Because he's a Shahid, the choir sings “The pure blood will produce honor and glory”.

The Hamas Palestinian regime wants Palestinian children to aspire to Shahada. Death by martyrdom is expected of children. “Honor and glory” and "Shahada is sweet" are messages that are specifically packaged for children on Hamas TV and on Fatah-controlled PA TV. Their schoolbooks do the same appalling thing - promote and glorify Shahada death among children.

"O heroes... Do not talk yourselves into flight. Your enemies seek life while you seek death. These drops of blood that gush from your bodies will be transformed tomorrow into blazing red meteors that will fall down upon the heads of your enemies." [Reading and Texts Part II, Grade 8 (2002), p. 16] 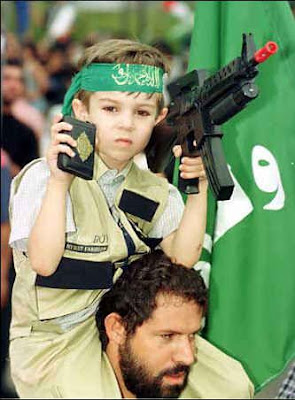 The following is an excerpt from the new clip (view it here) on Hamas TV:


"We have come!
Machine-gun and Quran in our hands,
We’ve grown and so has the right,
In the eyes of the wronged,
We swore to retrieve the land,
The pure blood will produce honor and glory.
[Al-Aqsa TV, May 27, 2007]

PMW points out that between March and May this year, Hamas TV has been regularly broadcasting a video dramatization of a four-year-old girl, the daughter of an actual suicide bomber, singing to her dead mother and promising to follow in her footsteps. The video clip (see it here) ends with the child picking explosives from her mother's drawer.


Another video shown on Fatah's Palestinian Authority TV hundreds of times between 2001 and 2004, depicts a young boy leaving a farewell letter to his parents as he goes off to seek Shahada, describing the death he aspires as "sweet." This PA clip is fiendishly designed to offset a child's natural fear of death, by depicting Shahada as heroic and tranquil.

From 2000 to 2003, PA TV broadcast a music video depicting the delightful Shahid paradise of Muhammad Al-Durah who, Pal-Arabs assert, died in crossfire as a result of Israeli actions. The child actor is shown flying a kite, frolicking on the beach and at an amusement park. The clip (see it here) opens with an invitation to other children from Al-Durah to aspire to Shahada: "I am waving to you not in parting, but to say follow me."

PA TV frequently shows a clip with two 11-year-old Palestinian girls talking about Shahada. They explain that "all Palestinian children" view Shahada as more worthwhile than living because of its promised grand after-life.

And to flesh out the picture, Little Green Footballs posted a video tonight depicting children in Gaza performing a “play” in which they dress up as suicide bombers and terrorists to the evident pleasure of a crowd of doting parents. It's here. 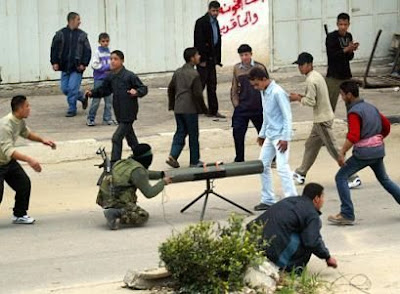 So... for those curious to know whether the Pal-Arabs have some achievement to match Israel's long list of patents, inventions, medical breakthroughs, prizes, awards, humanitarian achievements, foreign aid, creative music, hospitals, medical care, agriculture etc etc... you have your answer. The world's leading producer of death-cults for men, women and children, in living colour, right across the fence from here.

Now, what was that question again about death tolls among Pal-Arab juveniles?

This just can't be true - or the BBC would've told me about it. I mean, we pay them £3 billion a year to keep us informed...

They're even running a series of articles discussing the main obstacles to peace, so surely if this were true it would've been mentioned somewhere in these articles?

I don't mean to make light of something so utterly depraved, but what words could I possibly use to express the feelings of any sane person towards this moral abyss? One day the world will wake up.

"tragedy of two generations of that society's youth being manipulated and cajoled to literally commit suicide.

The unspeakable perversion is not a secret and there's no doubt who is doing it: their own "religious" "leaders", their own community elders and even their own parents. History has no parallel for this perversion."


For a Jew, you are woefully ignorant of your own people's history.

Ever heard of Masada?

To our enlightened visitor with the really sharp, really insightful question about Masada (but who is still too sharp and too insightful to sign her/his name and leave his/her email address): Masada, where Jewish parents ended the lives of their own children rather than allow them to fall prisoner to foreign barbarians is not remembered by us Jews because of the suicide that it involved. Instead it's recalled as a statement of the intense pride and determination that comes from building up your own land. Suicide is never and never has been glorified in Jewish life - it's understood as the literally last resort when everything else is lost and where the alternative is worse. (Roman children, in case you failed to note) were not the victims. By the way - can you recall the last time the child, wife or husband of someone from the Pal-Arab elite (i.e. from their "religious" "leadership" or from among their community heads) set out to die as a Shahid? By and large, it's a special privilege they reserve for (read: impose on) the troubled underclass of their society. This is especially plain when you look at the lives lived by the female ranks of Pal-Arab murderers.
Knowing how appallingly lacking in good sense and moral comprehension some of our anonymous visitors, this ends our discussion of suicide. Murder is murder.