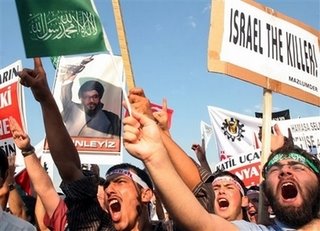 Reuters today throws this helpful light on how Shi'ite Iran, the chief financier and equipper of Hezbullah and thus a central player in the process that has devastated Lebanon and northern Israel, views the upcoming ceasefire and what we can expect from it:


Iran says disarming Lebanese Hizbullah 'illogical'
Iran welcomed on Sunday a planned ceasefire to halt the month-long war between Lebanon's Hizbullah and Israel but described the UN Security Council's call for disarming the Iranian-backed group as "illogical". "We are happy for the ceasefire in Lebanon. But the resolution is not balanced," Foreign Ministry spokesman Hamid Reza Asefi told a weekly news conference. "It does not condemn the Zionist regime (Israel) and its crimes in Lebanon." Asked about the call for disarming Hizbullah, Asefi said: "This is a totally unreasonable demand. It is illogical." Opposition to Israel was one of the founding principles of the Islamic Republic. Iranian President Mahmoud Ahmadinejad has called for Israel to be "wiped off the map".

Speaking to a Jordanian newsagency, the Iranian foreign ministry was a little more expansive:


Iran: Israelis are losers in Lebanon

After one-month of war against Lebanon's resistance, Israelis are the absolute losers and Hizbullah is the absolute winner of the war, Iran's Foreign Ministry Spokesman said Sunday. Hamida-Reza Asefi pointed to the Israeli media admittance that the regime has been defeated in the war, adding the "Quds (Jerusalem) occupiers" failed even though they were enjoying all sorts of military, economic, intelligence and diplomatic backings. "The war turned into a complete fiasco for the regime," Asefi added, according to IRIB. Asefi criticized the United Nations for its weak performance in issuing resolution against Israel, adding that the delay undermined the UN credibility and discredited it before the world public opinion. Asefi affirmed that the Islamic Republic of Iran is very pleased with any ceasefire and ending the massacre of the Lebanese people. "The resolution 1701 fails to point to the aggressor party and so opens the way for the Zionist regime," Asefi warned. Asefi underlined however that the Lebanese government and nation must decide about the resolution. Asefi called the Zionist regime source of tension, crisis and war in the Middle East, adding legitimate resistance and defense will continue as far as occupation lingers. "Lebanon and legitimate resistance of Hizbullah broke the Middle East equation in favor of the dignity of the world of Islam," Asefi said.So we should all feel a lot better now, particularly the "peace" protestors marching yesterday with Hezbollah banners and Nasrullah portraits held aloft in San Francisco, Washington, Ankara, Damascus, Toronto, Edinburgh and other places. The peaceful peace protestors in the picture above are in Ankara, Turkey.

Turkey is to supply one of the military contingents to the UN the critical piece of whose mission will be to disarm Hizbollah.