04-Dec-20: An editorial and Jordanian deception 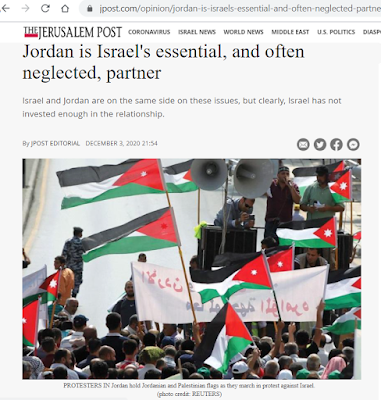 There's an editorial in today's Jerusalem Post under the heading "Jordan is Israel's essential, and often neglected, partner | Israel and Jordan are on the same side on these issues, but clearly, Israel has not invested enough in the relationship".

No one's name is attached to it so it appears to be, as in fact it describes itself, as "By JPOST EDITORIAL".

Jordan has a historic relationship with Israel and signed a peace treaty in 1994 but the peace has grown cold. Part of this may be personal, and speaks to the relationship between King Abdullah and Prime Minister Benjamin Netanyahu who seemingly do not get along. While Jordan-Israel ties are said to be good when it comes to regional security issues, publicly there is almost no manifestation of the peace deal between the countries. This is unfortunate, because...

During the visit to Jerusalem two weeks ago of US Secretary of State Mike Pompeo, we ran a large display advertisement on the newspaper's front page [described here: "19-Nov-20: Putting justice back on the agenda"] Not only did we get no response of any sort from Pompeo, but no one in his substantial entourage or in the press pool accompanying him commented publicly on our fairly prominent message. That most of them (at least) saw it is highly likely.

Call us disappointed - though by no means surprised given the history of obtuseness and silence by officials and (to a surprisingly large extent) media in three countries - the US, Jordan and Israel - since the US Federal charges against Jordanian fugitive Ahlam Tamimi were unsealed nearly four years ago ["14-Mar-17: Sbarro massacre mastermind is now formally charged and her extradition is requested"].

We were disappointed again when the Jerusalem Post published an exclusive interview with Pompeo the next day. Tamimi and extradition were not mentioned.

That's relevant background to why we posted this message on the Jerusalem Post's website this morning after seeing the editorial we just mentioned. Here's what we wrote;

An unobjectionable editorial line. There are obviously multiple sides to this not-so-simple issue.

But it's hard for me as the father of an Israeli child (a handful of us here in Israel can make the very same statement) murdered by a woman who today enjoys massive acclaim and support among Jordanians, to overlook how the vexed matter of Jordan illicitly refusing to extradite Ahlam Tamimi to Washington is missing from the analysis.

Tamimi, a fugitive from US justice who has never been in hiding for a day in Jordan where she lives, is wanted in the US to answer to US terrorism charges. And the extradition treaty between the US and Jordan is utterly clear: the US wants her and Jordan has to hand her over.

But Jordan has put out a smokescreen of deception that has enabled it to escape the burden of handing her over.

Editorials like this one that carefully step around the Ahlam Tamimi issue - actually that conceal it - are a not-insignificant part of how the Jordanians keep getting away with it.

The issues that pain me in this are not legal or political or even journalistic. They're moral.

If we get any sharable response, we will publish it here.