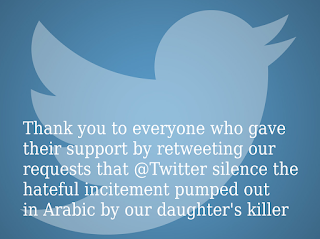 We're pleased to see that Twitter last night (Saturday) shut down the hateful account of the FBI fugitive who masterminded the bombing of the Sbarro pizzeria in Jerusalem. Our daughter Malki, 15, was one of her many victims.

Our very sincere thanks to all the good people who helped us in publicizing the existence of the account and in bringing it to the attention of Twitter.

The background is here: "23-Jun-17: Murder by social media (is anyone at Twitter reading this?)"

The woman will certainly open up additional Twitter and other social media accounts (if she has not already) in this unpleasant cat-and-mouse game.

That's because, beyond being a confessed, proud and unrepentant murderer, she appears to be deeply committed ideologically to inciting others to emulate what she did and to kill Jews. She has been engaged in this since even before her unwarranted and deeply ill-conceived and regrettable release from an Israeli prison cell in October 2011 as part of the catastrophic Shalit Deal.

And since being released and returning to Jordan where she was born and has lived almost all of her non-prison life, she has operated a very well-funded, self-focused propaganda machine. She uses it to whip up support for more violence, more deaths, more Islamist ideological purity. She has a global following.

And - not so incidentally - in Jordan she enjoys protection from the US Department of Justice and the FBI which, since March, have been anxious to arrest her and put her on trial in a US Federal Court. She has expressed heartfelt gratitude to His Majesty King Abdullah II and his family and his law courts for what they have done to keep her safe and far away from her day in court. (Did you know Jordan and the US signed a two-way extradition treaty in 1995? The US says it's fully and completely in effect. The Jordanians have a new and somewhat different view. Read about that here.)

The world is a far better place for however long her messages of savage intolerance are silenced.

Why Israel’s 1967 Borders are Undefendable:

Ancient Roman historians connected Jews with the Land of Israel: