23-Jun-17: Murder by social media (is anyone at Twitter reading this?)

She has had one for years. Actually more than one. The latest Tamimi Twitter account replaces the one about which we - and many other people responding to a campaign we spearheaded in April 2017 - complained to Twitter. After an intense effort, that Twitter account was shut down. So too was her Facebook page.

As we wrote in a blog post here about ten weeks ago:


We think this means the many requests we and our followers... filed with Twitter were heard. Whatever the case, the world is a better and safer place with Ahlam Tamimi's voice lowered by several notches... ["12-Apr-17: A modest step toward justice: Twitter today suspended the account of our daughter's murderer"]

But now, as we said a moment ago, she has another Twitter account. For now, we're not publicizing its address. We don't want to contribute to her gaining any more followers; not even one more. She created it in May.

We found it just yesterday and within a few minutes we filed a complaint using Twitter's standard forms and on-line procedure. It works in a frustrating way because it doesn't easily allow for any background or explanation or commentary. And once having filed it, we received this ambivalent, somewhat anaemic and entirely unsatisfying response: 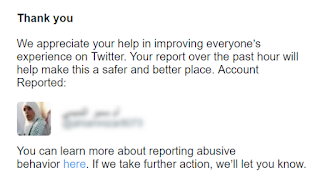 If we take further action? And what if you don't?

In the past hour, we filed a fresh complaint. This time, though, we answered one of the questions accurately (of course) but differently. As a result, we were then presented with a form we hadn't seen before. It allowed us to enter some free text instead of just clicking on fixed-option buttons.

Here's what we wrote:

This is the latest account of Ahlam Tamimi, a convicted Hamas terrorist who was added to the FBI's Most Wanted Terrorists list in March 2017, and is currently living in Jordan and on the run from the FBI and from US Federal charges. She is a notorious inciter of violence, a booster of murderous terrorism and the confessed murderer of our fifteen year old daughter and 15 other people.
After complaints from us as well as many others who responded to our Twitter campaign, her previous Twitter account [https://twitter.com/dreamsnnn] was suspended by Twitter in April 2017. By Twitter's own rules, the mere fact of her opening a replacement Twitter account ought to be enough for you to shut the new one down right away.
Her Twitter tweets are replete with expressions of solidarity with other terrorists and with hatred, lethal bigotry and calls for physical attacks against Israel, Zionists and Jews. She favours murder and encourages people - especially school-children - to follow her example and kill certain kinds of people in order to receive blessings from above.
I am puzzled at the slow response to my complaint. Are there any doubts on your part that Twitter needs to steer as far away as possible from this kind of abuse of social media?
I reported this account yesterday - about 18 hours ago - and received a formal acknowledgement. But no action.
The killer's Twitter account is still operating as of 2 minutes ago. It is now 12 noon Friday here in Jerusalem.

There has been no response in the half hour since we sent that off.

Some may ask why we find it so important to shut down this dangerous and hateful woman's social media output. The question has many answers but for the moment we offer an answer that the Islamist murderer herself wrote. In one of her tweets of the past two weeks, she said

Given how jihad-minded killers have been emerging, ready for murderous action, in practically every corner of the world in the past handful of years, how can anyone doubt that this cold-blooded savage is right?

UPDATE Saturday night, June 24, 2017 at 11:30 pm: We have just now gotten notified by Twitter Support, after another round of complaints filed by us and emailed to Twitter's senior management, that the murderer's account has been shut down.  Thank you for all who have been supporting our efforts.