15-Jul-16: The terrorist vehicle-ramming murders in France: what the media see and won't see

In the wake of a vicious mass-killing perpetrated by a person (or persons) who drove a large truck at high speed in zig-zag fashion through a huge crowd for about two kilometers, France's president, François Hollande, said in a televised speech last night what only the most obtuse of observers can have failed to comprehend: that all of France is living under the threat of Islamic terrorism:

“After Paris in January 2015 and then St. Denis in November last year, and now Nice, in its turn, is touched, it is all of France that is under the threat of Islamist terrorists,” Hollande said in a pre-dawn broadcast Friday which the Elysee, the presidential palace, posted on social media. He referred to deadly mass attacks in January on a satirical weekly and a kosher supermarket in Paris and in November on a concert hall in Paris, carried out by terrorists affiliated with Islamist terrorist groups.
A truck barreled into a crowd Thursday night during celebrations marking Bastille Day, the French independence day, killing 77 people. Reports said there might have been more than one attacker, and that the truck’s cab was filled with guns, explosives and grenades, according to local authorities.
The driver, who fired a gun into the crowd, was killed by return fire. An identity card in the truck cab bore name of a French Tunisian.
There was no claim of responsibility and security authorities were not yet describing the attack as terrorist, but Hollande made clear he believed that it was.
“The attack’s terrorist character cannot be denied,” he said. [JTA, July 14, 2016] 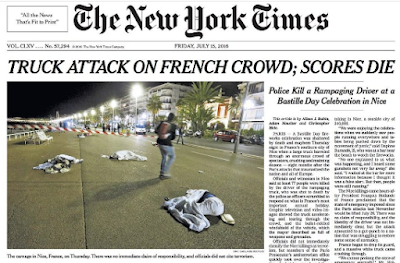 
...[A]s in the hours immediately after the Paris, Brussels and Orlando attacks, there was a now familiar celebration on channels run by groups that support the Islamic State, as well as on at least one channel affiliated with the group, also known as ISIS and ISIL. They cheered the carnage. On a channel created Thursday, called the United Cyber Caliphate, run by a group that has previously tried to carry out cyberattacks in the Islamic State’s name, a message included a single word — France — followed by a smiley face. The channel of an Islamic State member, Aswarti Media, which has repeatedly been shut down and claims 1,987 members, was posting the phrase “Allahu akbar.” Yet another suspected pro-ISIS channel showed an image of the Eiffel Tower going up in flames. [New York Times, July 15, 2016]

In the UK, the Telegraph via its live-blogging, shares some of what ordinary people, particularly in France, already seem to know [all direct quotes from Telegraph]:
Some observations from the Wall Street Journal:


The carnage in Nice marks the latest in a string of attacks against France over the last 18 months, traumatizing the country just as the government was preparing to relax its antiterror posture. If confirmed as a terror attack, it would represent a breakdown of the vast security dragnet France erected after the November’s Islamic State-sponsored assault that left 130 dead in Paris. It would also point to the country’s vulnerability in the face of extremist groups such as Islamic State, which has called for sympathizers to strike soft targets such as Thursday’s Bastille Day fireworks display celebrating the French Revolution.

Not only France's vulnerability, but that of every other city and country in the world. This is a war, and it will be won only after that's comprehended.


The French public and the government had just started to breathe easier eight months after the November attacks. The country had been on high alert as it hosted the European soccer championship, which ended this month without incident. “In the life of a nation there are tests—and we have been tested in the last year, and doubtless will be again. But in the life of a nation there are also moments of exhalation and collective joy,” Interior Minister Bernard Cazeneuve said earlier this week. “The Euro (tournament) was one of those special moments.” [Wall Street Journal]

The practitioners of terror are not acting on spur-of-the-moment impulses but see this as a process with a long path ahead and a distant horizon. Each killing, every outrage and massacre, represents for them a marker towards the victory they so clearly seek. The name we chose for this blog embodies the view we take of the period in which every country on earth now finds itself.

Here in Israel, terror by vehicle ramming is only too familiar to ordinary citizens and to the security forces. Click here for some of the dozens of vehicle ramming terror attacks we have reported in the past ten months.

The president of the Palestinian Authority, who we can be confident will be urged by his advisers to quickly denounce the carnage in France, has explicitly and repeatedly praised the vehicle-ramming attackers when the victims have been Jews and Israelis. We can be quite sure Mahmoud Abbas will refrain from calling the Nice terrorist "a martyr who quenched the land" with his "pure soul". But that's exactly what he did from Ramallah just four months ago. Does anyone think this is going to be mentioned in the mainstream media?

As of now, the French death toll has passed 80, and at least 100 others are injured. We will be updating this post during the day.

good broad coverage...war of cultures...somewhere along the line..some serious choices will have to be made...unfortunately other nutters will be inspired by this event...as they have been inspired by ISIS when it was not stamped out in its earlier days...S H Cohen