15-Jun-15: Trust us! Some stunning insights into an evolving alliance 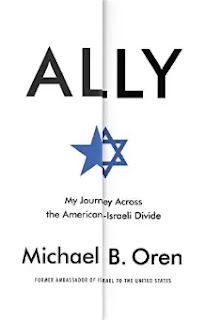 An important new book, a memoir by Prof. Michael Oren who served as Israel's ambassador to the US between May 2009 and September 2013, is getting media coverage this week. His vantage point as both an insider and a noted historian at a time of huge importance is an invaluable one.

It's worth noting that, unlike some other key ambassadorial appointments, Oren did not get the job through his being close to prime minister Netanyahu. In fact, as far as we can tell, he's never been regarded as a Netanyahu crony. Nor has he been associated with especially robust viewpoints about the US/Israel relationship. Until now.

He calls "Ally: My Journey Across the American-Israeli Divide", to be published next Tuesday, a book written "with love — and fear." He's not kidding.

We have not read it (it's not yet available in the stores) but were struck some things said by the author and his reviewer in an article by Gary Rosenblatt in the current issue of The Jewish Week NY. Under the title "No Way To Treat An Ally", it's (in the newspaper's words) a "devastating insider’s account of White House distancing from Israel." Some selected verbatim quotes:
The article is disturbing in ways that transcend (in our view) the genuinely-horrific daily reports from today's Syria, Iraq, Yemen, because as tragic and awful as the reality of those Arab-on-Arab slaughter-yards are, no one sane is trying to dress them up or justify them.

But on the intertwined issues of Iran and Israel, we are as dumbfounded as ever by the deep well-springs of public opinion that Obama's promoters keep succeeding to plumb. Most painful of all to us, and puzzling, is the understanding they seem to have tapped into among America's Jews:

Not just bad but singularly dangerous. As well-informed as an insider's comment gets to be, it's simply stunning that this one refers to the actions of the Obama White House.

[Postscript: If you are going to order the Oren book, or anything else, from Amazon, please know that if you do that via AmazonSmile, Amazon donates 0.5% of the purchase price to The Malki Foundation. Bookmark this link and support this worthwhile, efficient and constructive cause every time you shop.]

One of this blog's authors, speaking on behalf of himself and his co-blogger, was an invited guest on CNN International's news progr...