4-Dec-14: Knifing attack on shoppers in an Israeli supermarket: the aftermath

Lazar Berman, writing in Times of Israel this morning ["Supermarket owner says he won’t let terror attackers win"], quotes supermarket entrepreneur Rami Levy. The Ramy Levy chain has a major presence in the West Bank and is notably popular with both Israelis and Palestinians and a significant employer of Palestinian Arabs.

Levy says yesterday's knifing attack in the Mishor Adumim branch of his eponymous chain "wouldn't keep customers from his stores". He will continue to employ Arab workers alongside Jewish workers as he has till now. 180 people are employed in that Mishor Adumim branch.

Security cameras captured the moments of the frenzied attack on unsuspecting civilians - see the YouTube clip above, focused on the wine aisle. The two knifing victims, both of them men in their 50s, suffered light to moderate injuries. One was stabbed in the head, the other in the hand. Both were rushed to a Jerusalem hospital for emergency treatment and are thankfully recovering. 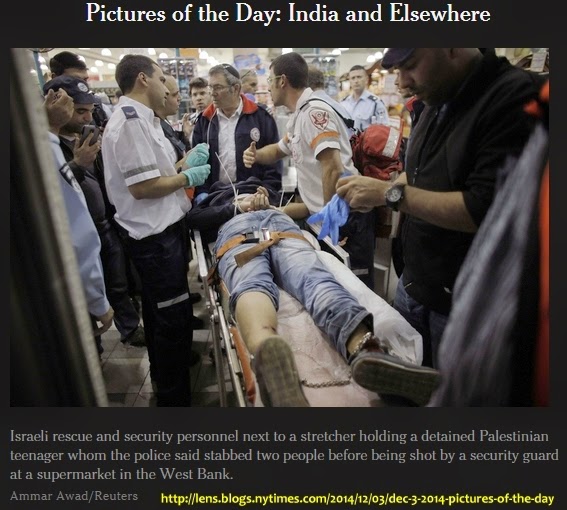 The attacker turns out to be a 16-year-old Arab male from the West Bank town of al-Azariya on the outskirts of Jerusalem, who arrived at the supermarket with two accomplices from his hometown; they too were arrested after the attempted murders. He is in the photograph above, which is taken from Wednesday's New York Times. The man who eventually stopped him by firing his pistol is an off-duty member of Prime Minister Benjamin Netanyahu’s security detail who happened to be in the store.

It's not at all hard to imagine a knife-artist like this punk being torn limb from limb in a different setting far from Mishor Adumim. But this particular aspiring terrorist was removed from the scene by solicitous and professional ambulance men and is now being made all better in a Jerusalem hospital - a first-rate, world-class Israeli Jerusalem hospital.

For the haters of Israel who will never see these words, it's worth our noting that the mayor of Ma’ale Adumim, Benny Kashriel, says in the same Times of Israel article that while there will inevitably be demands for Palestinian Arabs to be excluded now from the Mishor Adumim area (it happens to be a significant industrial zone where many Arabs have well-paid jobs), he remains "committed to ensuring that they continue to work at Mishor Adumim and make a decent living".

We are waiting to see which of the numerous Palestinian Arab terror industry operations claims credit for the attempted killings in the supermarket. No one has till now, but it's bound to come.  And right after it, sadly, the first claims that Israel is again oppressing Palestinian Arab children like the 16 year old knifer in the video.