An Associated Press report published more than three years ago seems to have had a sharp eye on the economic fortunes of the self-selecting clique of Hamas insiders who have brought unspeakable misery onto the heads of Gaza's Palestinian Arabs. Headlined "Are Hamas Loyalists Growing Rich on the Backs of Poorer Palestinians?", the analysis by Scott Baker from August 2011 starts with this:


A budding middle class in the impoverished Gaza Strip is flaunting its wealth, sipping coffee at gleaming new cafes, shopping for shoes at the new tiny shopping malls, and fueling perhaps the most acrimonious grass roots resentment yet toward the ruling Hamas movement. This middle class, which has become visible at the same time as a mini-construction boom in this blockaded territory, is celebrating its weddings in opulent halls and vacationing in newly built beach bungalows. That level of consumption may be modest by Western standards, but it’s in startling contrast to the grinding poverty of most Gazans, who rely on U.N. food handouts to get by. Some of the well-off are Hamas loyalists. That rankles many Gaza residents because the conservative Islamic movement gained popularity by tending to the poor — through charitable aid, education and medical care — along with its armed struggle against Israel.
“Hamas has become rich at the expense of the people,” fumed a 22-year-old seamstress, Nisrine, as she stitched decorative applique onto a dress. She wouldn’t disclose her family name, not wanting to be seen criticizing the militant group.
Gaza’s Hamas government denies its loyalists have gotten wealthy since the group came to power.
Corruption “doesn’t touch us,” said Hamas official Yusef Rizka... “There is a nouveau riche that has followed the rise of the government,” said Alaa Araj, a former Gaza economic minister and businessman considered close to Hamas. “We must sound the alarm,” he said.
...Some two-thirds of Gaza’s 1.6 million people live in poverty and rely on U.N. food aid. About half the work force is unemployed. Many employed Gazans are paid miserly wages, keeping them struggling. They include the seamstress Nisrine, who is paid $5 a day, money that her family keeps. Baker Sami Awad, 27, earns $9 a day to support his five siblings and his sister’s two children. Their father abandoned them years ago; his sister’s husband was killed in an Israeli incursion. Their stories are typical.
Hamas has always had a small core of prominently wealthy loyalists. But it appears another small group has seen its fortunes rise since the Hamas came to power, primarily investors and high-level civil servants in Gaza’s 24,000-strong bureaucracy...

Hamas has become rich at the expense of the people, the young woman interviewed in 2011 says. And now, three years later, we have a published estimate of just how rich.

Quoting a business magazine, Times of Israel in a November 13, 2014 report ["Hamas second-richest terror group in world, Forbes says"] estimates that Hamas is now number two on the list of Top 10 terror groups by wealth, with assets of a billion dollars. Unlike number one, ISIS, Hamas does not have access to oil it can sell, or established banks whose vaults it can plunder:


The report does not detail where the terror groups get their money from, but Hamas had been able to control imports into the Gaza Strip through a series of smuggling tunnels from Sinai before they were largely destroyed by Egypt’s army over the last two years. The organization is also backed by international donors like Qatar who donate money to the Strip. [Times of Israel]

(If you're wondering, Hamas comes just ahead of FARC, the Revolutionary Armed Forces of Colombia which has $600 million in assets; Hezbollah is fourth with $500 million; and the Taliban, with an estimated $400 million.)


Hamas has no oil fields or banks at its disposal... it has something almost as good: An overpopulated strip of land where more than a million people live at their misery. Though Hamas long maintained an image as an efficient provider of social services to the people of Gaza, the reality is that it is—like its Fatah rivals in the West Bank—more akin to a mafia family than a government and rakes in money extorted or taxed from Gazans hand over fist. Hamas also profited handsomely from control of the smuggling tunnels that used to link Gaza to Egypt and also rakes in huge amounts of aid from its Gulf State patrons...

In the wake of the July/August fighting with Israel, Hamas is now expecting the arrival of cash from a wide range of donors who pledged some $5.4 billion during a one-day donor conference in October 2014. Qatar promised $1 billion of that total (but note that despite its astronomical wealth, the gas-rich family business has been a notorious non-payer in past pledge rounds.) Via its Secretary of State, the US committed $400 million; the United Arab Emirates and Turkey each pledged $200 million. According to The Guardian,


"The amount promised at conference in Cairo far exceeded the $4bn the Palestinian Authority said it would cost for reconstruction..."

but there is not much in the way of explanation as to how the excess money will be applied. Tobin assesses the impact:


In the absence of a commitment to overthrow Hamas, money donated to Gaza is an investment in future war, not peace or humanitarian values. Its place on the list of wealthiest terror group mocks the West as much as it does the Palestinians who suffer under their rule. [Commentary Magazine]

So too does the personal fortune of Khaled Mashaal, the Hamas supremo who lives in luxurious quarters in Doha, Qatar, far from the Gaza Strip, and who is said to have amassed, along with Mousa Abu Marzuk


vast personal wealth estimated at $2.5 billion each. Mashaal was alleged to have appropriated, for himself and his confidantes, the entire Hamas "Syrian Fund" of hundreds of millions of US dollars upon leaving Damascus for an opulent lifestyle in Qatar in 2012 [Wikipedia]

The photos below are from the July 2011 opening of the al-Andulusia Mall in the Gaza Strip. It's no Beverly Hills. But neither should the Hamas-dominated area be confused with an open-air prison or worse, as so many media commentators are fond of terming Gaza. This $4 million, multi-story shopping center would never have been built if Gazan investors were not confident that they would profit from it. Their situation assessments don't depend on The Guardian or the BBC. 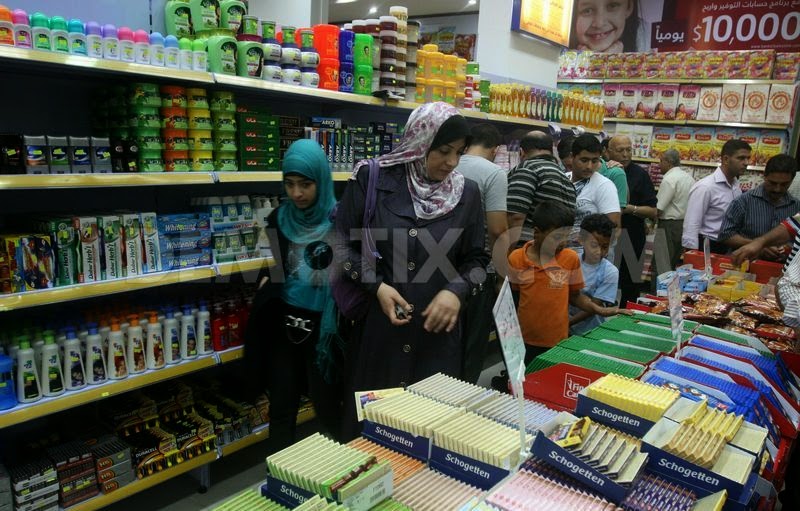 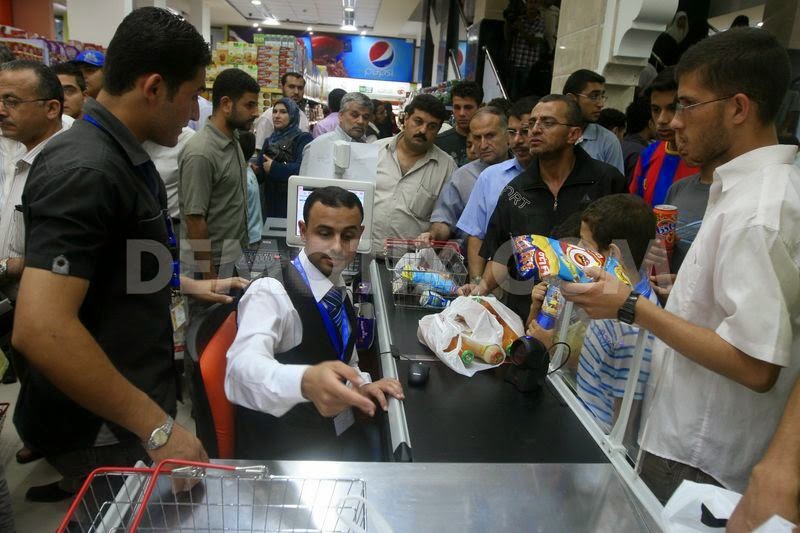 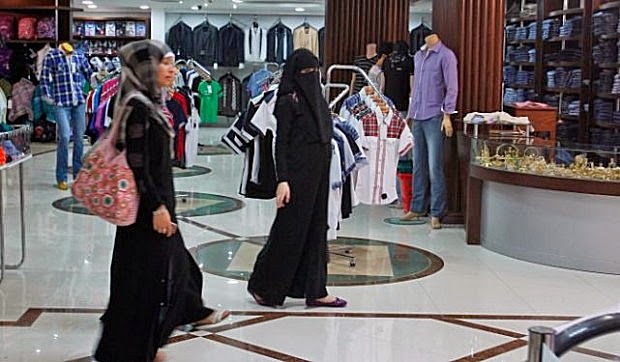 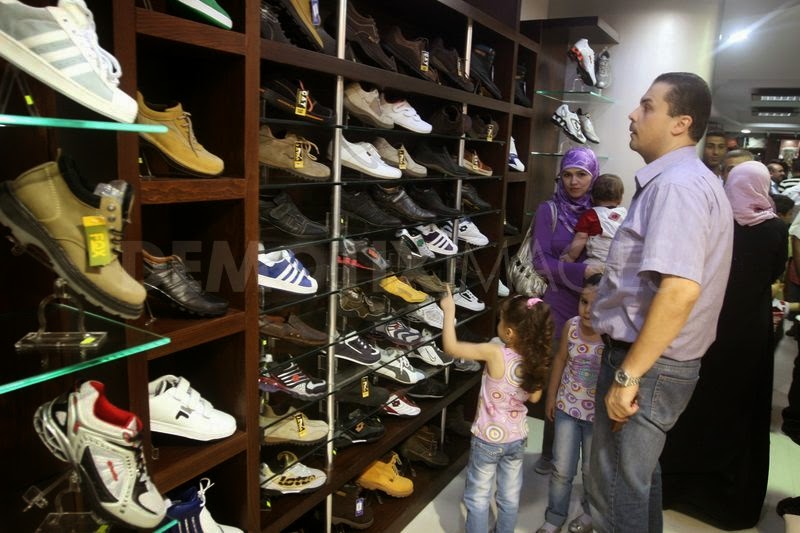 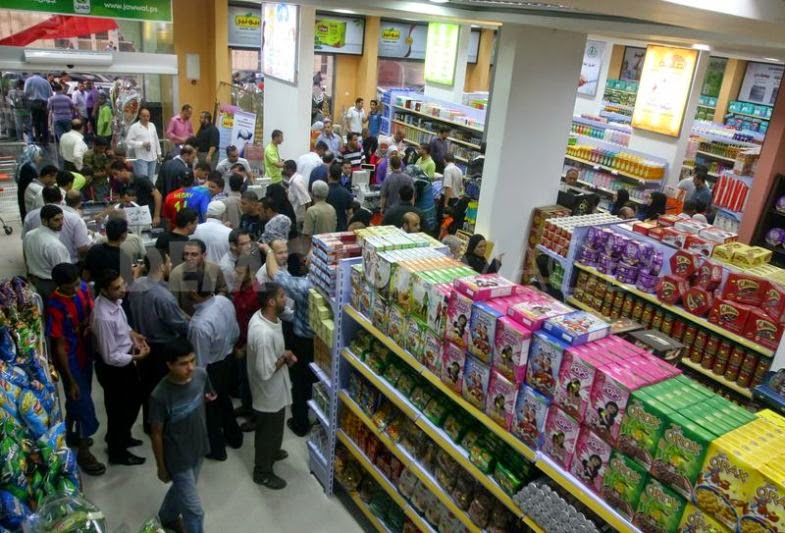 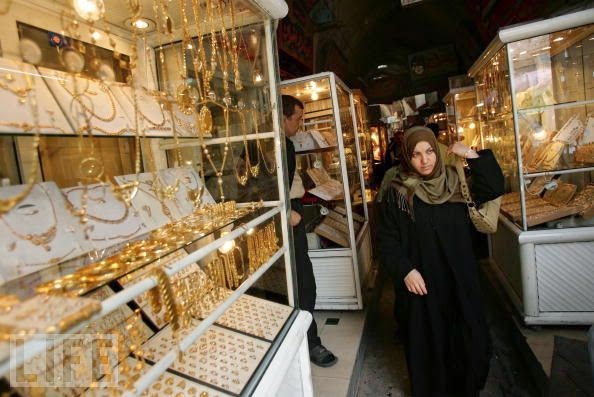 There has never been much secret about how the economic interests of Hamas and its inner clique serve as fundamental causes of the endless deprivation and violence that characterize today's Gaza Strip. Why the political leaders of the wealthy countries of the West would choose to ignore this, and its consequences, is the real mystery.