30-Apr-14: A moment of moral clarity as Mahmoud Abbas and his PA prepare to inter another of their inspirational heroes

From Israel National News this morning


Israel Returns Body of Sbarro Terrorist to PA | Dalit Halevi | First Published: 4/30/2014, 1:13 AM | Israel has returned to the Palestinian Authority (PA) the bodies of four terrorists who carried out deadly terrorist attacks against Israelis, including the body of the terrorist who blew himself up in the Sbarro restaurant in Jerusalem in 2001. The PA-based Safa news agency reported on Tuesday that the terrorists... In addition to Izz al-Din al-Masri, the Sbarro suicide bomber, Israel also reportedly handed the body of suicide bomber... The attack at the Sbarro restaurant in Jerusalem in August of 2001 was one of the deadliest terror attacks in Israel’s history, and it took place during the Second Intifada, also known as the Oslo War. 16 people were killed in the Sbarro attack [our comment: actually fifteen but a victim remains unconscious today as she has for the past twelve and a half years] including five members of the Schijveschuurder family from the community of Neria in Binyamin. Ahlam Tamimi, the female terrorist who drove [our comment: not true; she accompanied him by by bus and taxi cab; her major contribution to this crime was not the accompanying but the planning of the massacre before it was executed] the suicide bomber to the attack, was released in 2011 in the Gilad Shalit prisoner exchange.

For the record, the Israeli decision to hand over the body of Al-Masri, the human bomb whose explosion caused so much devastation, grief and ongoing pain to so many Israelis, was made on the basis of zero consultation with the families of his victims. There was also no pre-hand-over official notification to the news media or to the judicial system as far as we know. The Arab media are the sole source of the news. 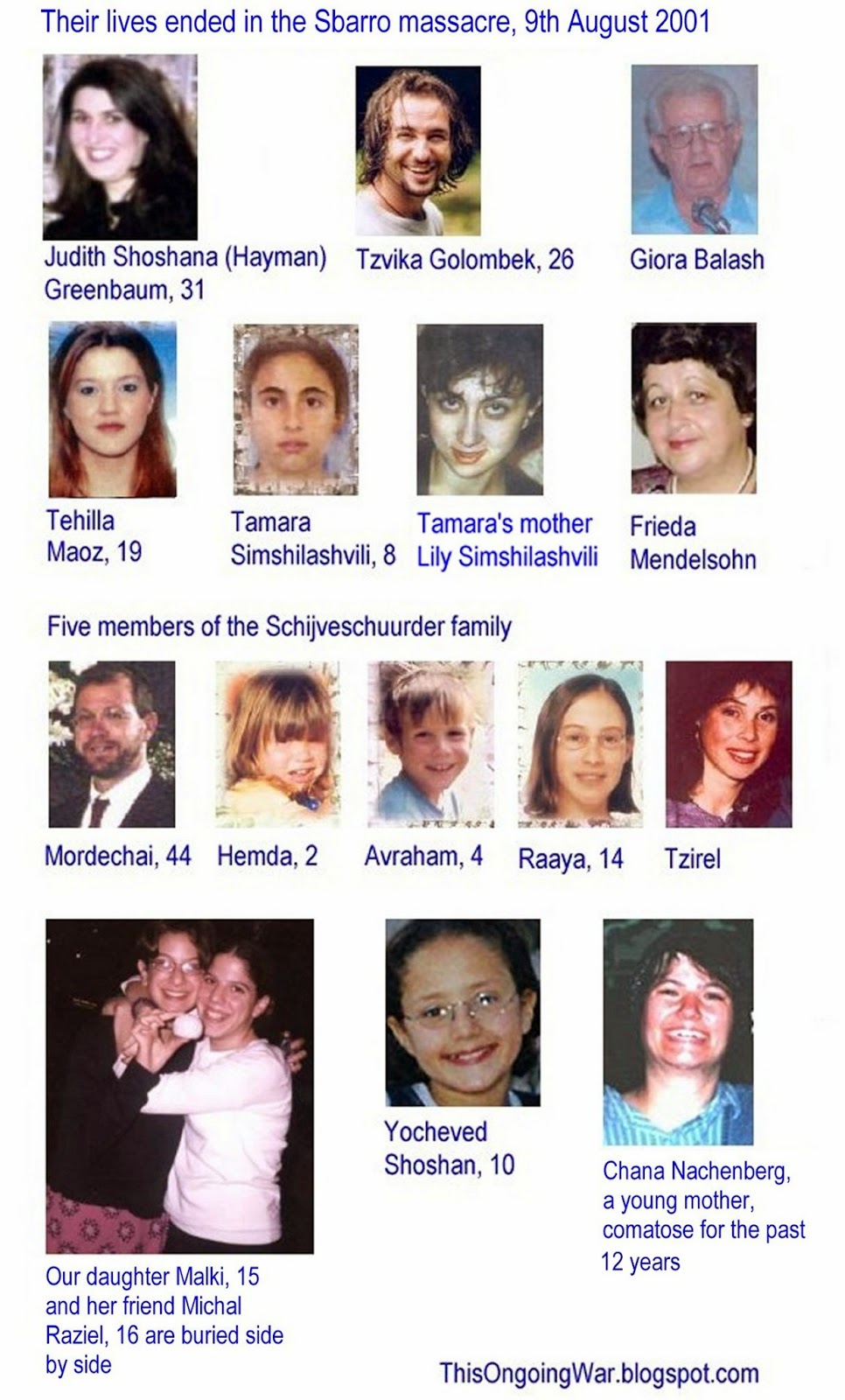 What next? Will the human bomb be quietly buried in an unmarked grave, with a nondescript marker identifying the place of his remains? Will this happen in the dead of night so that civilized people will not be offended, and so that their civilized lives can go on undisturbed?

Perhaps in some parallel universe.

But not in the world where we live - a world where the Palestinian Arab people are lead by individuals fully engaged on a daily basis in cynical incitement towards hatred and acts of savagery; whose deep and personal involvement in praising the barbaric killers of children and of elderly Holocaust survivors has produced mass rallies where men, women and children are whipped into frenzies of baying for more blood, and videos of school children yearning to become fresh human bombs themselves.

Stand by for more of the same as the Palestinian Authority, probably with its new business partner Hamas (who long ago claimed al-Masri as one of its heroes), prepares to celebrate the life and death of the human bomb who murdered 15 innocents. In fact, it's begun (YouTube, in Arabic, last night).

(And this side question: Will the world's most important organization of Protestant churches take part in the celebration? Will they condemn it? Or sit on the fence? Does their theology teach that "freedom with justice and dignity" applies to people like our daughter's cold-blooded killers and those who stand proudly with them? But not to the victims?)

My heart goes out to you.

Thank you, Barbara. But let's focus for a moment on other hearts - the hearts, for instance, of the many churches and the WCC, for whom the human bombs, the foot-soldier terrorists, those who sent them, the convicted murderers - are the true victims. It's THEIR human rights and infringed dignity that get all that Christian charity and attention. We sent the WCC's secretary-general our post about this [see http://thisongoingwar.blogspot.co.il/2014/04/21-apr-14-attention-world-council-of.html] last week. The thundering silence from them is another morally-clarifying moment.