20-Nov-13: It's Wednesday. Time for yet another UNRWA funding crisis

UNRWA, the utterly unique refugee-relief body with the vast budget that serves only one specific population and whose activities are calculated to perpetuate, not solve, the problem it purportedly addresses, has a money problem. Again.

U.N. Palestinian Agency to Stop Paying Wages | AFP November 19, 2013
The United Nations will stop paying wages to thousands of workers helping Palestinian refugees next month because of a growing cash crisis, a top U.N. official said Tuesday. The U.N. Relief and Works Agency (UNRWA), one of the U.N.'s oldest agencies, faces a "dire situation" with a $36 million deficit, under secretary general Jeffrey Feltman told the Security Council.
"UNRWA will be unable to adequately fund its core services -- especially in education, health and poverty mitigation -- and will be unable to pay December salaries of its 30,000 teachers, medical personnel and social workers," Feltman said.
The agency was set up in 1950 to help Palestinian refugees who lost their homes because of the 1948 Middle East conflict. It estimates that it now helps about five million people. The United States and European Union have traditionally been UNRWA's biggest donors to its two year budget of more than $1.2 billion. The agency also faces a crisis in the Hamas-controlled Gaza territory, after Israeli authorities discovered a tunnel from the besieged strip into Israel in October. Israel suspended the entry of all construction materials into Gaza and since then 19 out of 20 UNRWA construction projects in the territory have been halted.
Feltman said the halt of the building work had "put thousands of people out of work" and called on Israel to reconsider its move.

It's a pity that AFP's syndicated report doesn't address some of core issues that would go some way to explaining why UNRWA keeps suffering from problems of the same sort. They might have referred to a useful summary of how this "historical con job" has worked for more than six decades. Or tapped into what we wrote here: "19-Jun-13: We actually do understand why Arab states put almost no money in the Palestinian Arab "refugee" fund pot. We just don't get why the US does."

We stand by the conclusion of that June post.


In this ongoing war, UNRWA is not part of the solution. It's central to the problem. And the US is ensuring it stays that way. Does anyone really know why?

It might also have been useful if AFP's editors reviewed a recent UN press release in which the solution to UNRWA's perennial funding problems appeared to be at hand, but which with the hindsight of two months was yet another self-serving piece of nonsense. See "Arab and Other Donors Vow Increased Support for UNRWA", September 2013.

Who does provide the money for UNRWA? AFP could have told, but didn't. The last time we did, we said this:


If you assume UNRWA's budget is funded by those ultra-wealthy Arab oil potentates and the statelets they run, think again. We pointed out in a post almost a year ago that only one non-Western entity, the Islamic Development Bank, is in UNRWA's top twenty funders list - and that one comes in at nineteenth place with a contribution 3% the size of the hated Americans' and 3.5% of what Australia (Australia!) contributes. The numbers in the table we prepared below come from the UN itself. 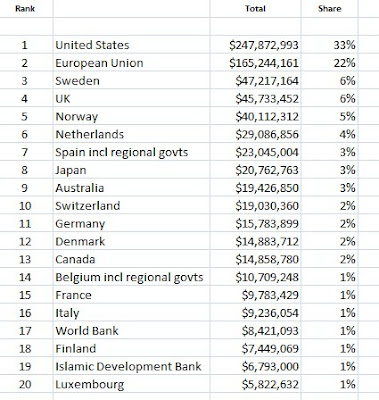 It was we who created the table itself. The numbers are the official donation data provided by UNRWA [source] covering all donations for the year 2010 and ranked by size of overall contribution.
Is there anything that reasonable people can learn from this? Why is it not better understood?

Email ThisBlogThis!Share to TwitterShare to FacebookShare to Pinterest
Labels: UNRWA