28-Oct-13: It's official: 26 more convicted killers to be handed over to PA and Hamas 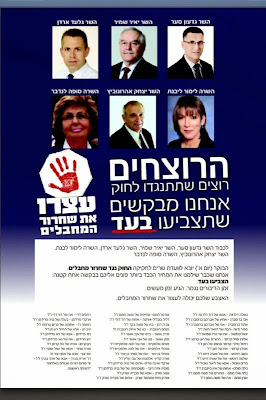 The Prime Minister's Media Adviser issued a statement a few hours ago saying that the government had tonight approved the release of 26 Palestinian prisoners from prison, "pursuant to the Government's 28 July 2013 decision to resume the diplomatic negotiations between Israel and the Palestinian Authority".

Their names are due to be published on the Israel Prisons Service website tonight. We cannot see them there at this hour (midnight, Sunday night, Israel time).

The prime minister, according to the Jerusalem Post, told ministers from his Likud party that when it comes to this issue, "promises must be kept".

He refrained however from making any comment to them about how a politician (Binyamin Netanyahu) can have made public statements in books and political speeches in which he boldly outlined a no-holds barred strategy of firmly resisting pressure to give in to the demands of terrorists, and then done precisely what he and his books warned against doing.

If Binyamin Netanyahu is embarrassed by the duplicity of his political turn-around, he and his staff are doing a first-rate job of concealing it.

We asked here in July why an extraordinary decision to free unrepentant killers, one that brutally overturns basic notions of justice, has met with such thundering silence. The answer cannot be that there is no other way. We are certain there is another way, and we have strong support from the acknowledged leading thinker in the field of how to deal with the terrorists.


“A government that seeks the defeat of the terrorists must refuse to release convicted terrorists from prisons… Releasing imprisoned terrorists emboldens them and their colleagues… By nurturing the belief that their demands are likely to be met in the future, you encourage terrorist blackmail of the very kind that you want to stop. Only the most unrelenting refusal to ever give in to such blackmail can prevent this.”[“Fighting Terrorism: How Democracies Can Defeat Domestic and International Terrorists”, Farrar Straus Giroux, New York 1995 at page 144]

The writer of those words is a younger Binyamin Netanyahu. Eighteen years later, and as prime minister, he is facing precisely the test about which he wrote in his best-selling book. But 18 years is a long time - actually a lifetime if you think about murdered fifteen year olds like our daughter Malki. And 18 years later, he is no longer the thinker, writer and strategist he was then...

If you're in Israel, and you are as angry and outraged as we are by the reality of this government decision, and the manner in which it was adopted, please consider joining us on Monday evening at a major mass protest event to be held outside the Ofer Prison on Jerusalem's northern edge. Ofer is where the Palestinian Arab prisoners are being assembled in the next 24-36 hours, prior to being released.

The protestors will form a human chain around the prison, to symbolically "stop the release of terrorists". Bereaved families and government ministers will join the protestors. On-site parking is said to be available for all participants. For directions to Ofer Prison, click here for Google Maps.

I'm heartened there are Jews who are still human beings - passionate enough to take a stand against evil and do what is right.

Jews who perpetrate evil or shrug it off will become like Sodom - to be wiped off the earth forever as punishment for their sins against G-d and justice.

Yet those forming a human chain around Ofer Prison inform us those who are righteous - the righteous remnant - do still exist and it is for their merit that Israel and the world will continue to endure.

Every decent person needs to take a stand. G-d asks no less of us for ourselves and our children! The time is now.