28-Jul-13: Releasing unrepentant killers: a massive 9.4% of Israelis are in favor 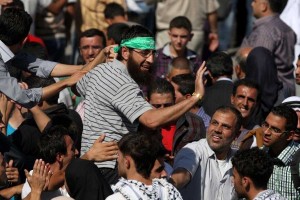 To say Israelis are unwilling to see even more exultant Palestinian Arab killers walk free under political pressure is a gross understatement. The one opinion poll we have seen so far says that what prime minister Netanyahu announced on Friday has the support of fewer than one in ten Israelis.


Poll: 84% of Israeli Jews against Palestinian prisoner release | Israel Hayom, Friday July 26, 2013 |
The vast majority of Israeli Jews are against the release of Palestinian terrorists "with blood on their hands" as a means of restarting peace talks with the Palestinians, a poll commissioned by Israel Hayom has found. Almost 85 percent of Israeli Jews are against the release of terrorists who have committed deadly attacks as a means of facilitating the upcoming peace talks, the poll shows (9.4% said they would support such a move and 5.7% had no opinion)... The poll was conducted by New Wave Research on Wednesday.

The cabinet is due to meet this morning and deal with the releases. Barak Ravid writing in Ha'aretz, says even the decision-makers have been kept in the dark about how many killers will be walking, and who they are. There's something familiar in the position in which they find themselves:


Three Likud minsters stated on Saturday morning that they have yet to receive any briefings regarding the decision to be subject for approval on Sunday. “It remains unclear to us how many prisoners will be released, or the reasons for any possible changes,” said one of the minsters. Another minster added: “They briefed the media, but told us nothing.” [Ha'aretz]

How can this be? Netanyahu explains:


At times, prime ministers need to make decisions that oppose public opinion – when the move is important for the state." [Ha'aretz]

As political statements go, it's galling. But not as galling as the absence of criticism from those parts of Israeli society - the mainstream media and the political opposition in particular - accustomed to reflexively lambasting him and his policies. Nor is it as galling as the idea that a cabinet full of ministers appears poised to give legal effect to a decision so totally opposed by the people who put them there.