9-Feb-13: Hezbollah and Europe: Decisions need to be made as if people's lives were on the line 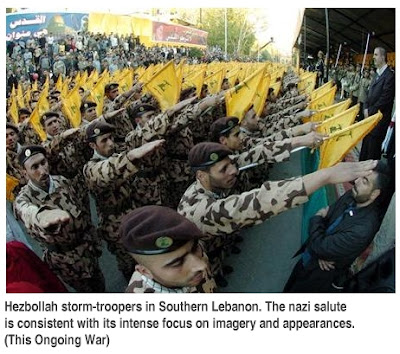 Since our principal focus here is terrorism and what it is doing to the lives of people like us, it's natural that we deal regularly with the ongoing dangers posed by one of the meanest, best equipped and demonstrably committed terror armies in the Islamist firmament: Hezbollah.

Just a few days ago, we posted here [see "5-Feb-13: Now that the Bulgarians have fingered Hezbollah, what happens next in Europe?"] about how things look now that the murderous Hezbollah attack on Israelis in a Bulgarian seaside town has been investigated and the key culprits identified. And we pointed out how the European role is central to what gets done next.

We have just now seen an editorial that ran in the Washington Post on the same day as our blog post. We are reprinting the whole text below in the hope of contributing to understanding of why the conduct of the EU leadership - and especially that of the political heads of France and Germany - ought to be criticized and changed in how they deal with Hezbollah and its activities on the continent.

European Union must respond to Hezbollah’s attack in Bulgaria

ON TUESDAY the Bulgarian government confirmed what most of the world has known for months: The bombing of a bus carrying Israeli tourists in the Black Sea resort of Burgas last July 18 was carried out by members of Lebanon’s Hezbollah organization. The results of an official investigation present leaders of the European Union with a reality that will be difficult to ignore. They must decide whether to allow a terrorist attack on E.U. territory to go unpunished or to sanction a movement that is both an Iranian proxy and the dominant party in the Lebanese government.

The case for sanctions is a strong one. The Burgas attack, which killed five Israelis and wounded more than 100, was not an isolated incident but part of a campaign of terrorism against Israeli, U.S. and gulf state targets by Hezbollah and the Quds Force of Iran’s Revolutionary Guard Corps. According to a new report by Matthew Levitt of the Washington Institute for Near East Policy, the two groups decided in January 2010 to launch a campaign of violence aimed at punishing Israel for the assassination of Iranian scientists and deterring an attack on Iran’s nuclear program.

Since then the Quds Force has, among other things, plotted to kill the Saudi ambassador to the United States in Washington and the U.S. ambassador to Azerbaijan, and it has attacked an Israeli diplomat’s wife in India. Hezbollah has attempted attacks on Israeli tourists in Cyprus, Greece and Thailand as well as in Bulgaria. Mr. Levitt says that more than 20 terror attacks by Hezbollah or the Iranian force were detected between May 2011 and July 2012; fortunately, almost all failed or were disrupted.

Israel participates in this shadow war, too: Five Iranian nuclear scientists have been assassinated in recent years. The United States has sponsored cyberattacks on Iranian nuclear facilities. But nothing justifies Hezbollah’s attempts to murder tourists; one of those killed in Bulgaria was a pregnant woman. Nor should a democratic community such as the European Union tolerate terrorist attacks on its territory by an established organization such as Hezbollah, which seeks recognition as a legitimate political movement worthy of governing Lebanon.

The United States, which long ago designated Hezbollah as a terrorist organization, has been pressing European leaders to do the same so that the group’s funds in European banks and other financial assets can be targeted. Several governments, led by France, have resisted; they worry that sanctions could further destabilize Lebanon or subject European peacekeepers in the south of that country to reprisals. Bulgaria’s findings should end the debate. Inaction would mean accepting that Europe can be a free-fire zone for Iran and its proxies.

Meanwhile, a Herb Keinon article in the Jerusalem Post ["Hezbollah will gain immunity without EU blacklist"] quotes an Israeli official who points out that current European policy on the Hezbullah terrorists amounts to providing them with a free pass:


'Europe needs to decide whether it will allow itself to be attacked with impunity', an Israeli diplomatic official said on Wednesday, explaining the argument Israeli representatives will now use to get the EU to place Hezbollah on its terrorist blacklist. Since it is clear Bulgaria is not going to respond to Hezbollah attacks on its soil by bombing training bases in Lebanon, according to this argument, if there is no strong European diplomatic reaction, then Hezbollah will essentially have immunity.