30-Dec-12: A small, bitter taste of being at the receiving end

We started this blog to give as a forum to write here the war being waged by the terrorists, an ongoing war.

We often mention the circumstances that impelled us to want to write: the cruel and painful loss of the beautiful life of our daughter Malki who was fifteen when she was murdered in an act of Hamas savagery. But neither here in our blog, nor elsewhere, do we dwell on the events themselves: how we felt that day, what it looked like from up close. It's enough that the facts be known.

In trying to give an as-it-happens overview of the events in this ongoing war, we mention attacks that most people often don't know anything about. The reporting of the acts of terrorism, as we have said here often, is poor, sporadic and mostly not informative or analytic. People far from the scene usually don't know what happened (unless it turns out to be an especially expensive attack) because the mainstream news organizations no longer see much value in reporting them. And they rarely comprehend or try to examine what these attacks do to the people exposed to them, the survivors.

Earlier today (Sunday), another in a long, long line of so-called rock-throwing attacks landed on top of a young family from the small pioneering community of Rehalim in the Binyamin region of Judea, north of Jerusalem. (It's close to the older and larger Shiloh community, and has a population of about 40 young families, including some 50 pre-school children.)

Arutz Sheva/Israel National News published a first-person account some hours ago, accompanying it with photos of some aspects of the aftermath. It's a somewhat sanitized report: no screaming toddlers here; no photos of family members comforting each other; no facial close-ups showing the shock, the relief, the fear. Instead, we have some dispassionate photos of the family's car and of the rock that came within inches of causing a terrible tragedy.


Miracle Saves Baby from Rock-Throwing Terrorist
Israel National News | December 20, 2012  |  A rock-throwing Arab teenager nearly killed a baby Sunday morning when the huge rock he hurled at the car crashed a few inches from the infant... “We were driving south from Rehalim when an Arab around 17 years old, standing next to a school, threw a huge rock at the car”... [The family's vehicle was] traveling around 80 kilometers an hour (50 mph), and the rock smashed through the car window and landed only a few inches from the baby’s seat. [The driver, the child's father] was sitting with his wife in the vehicle, and their eight-year-old son and two-year-old daughter were sitting next to the infant... Mainstream media did not report the attack, following usual practice to ignore rock-throwing unless it causes an accident or injury.

The INN report makes the point that when seventeen year-old Palestinian Arabs, like the one today, hurl rocks - which are frequently more accurately termed boulders - at Israeli vehicles on the roads, their aim is to inflict maximum injury. Preferably, to kill.

The criminal prosecution of the Arab gang accused of killing Asher Palmer and his two-year-old son a year ago near Kiryat Arba has focused some attention (certainly not enough) on the growing phenomenon. We have attended some of the hearings in the Military Tribunal at Machane Ofer, and have written about the tragedy of the Palmer murders - see "11-Oct-11: Living with neighbours who want us all back to the stone age". The words we use ("rock" and "throwing") to describe these acts of murder and attempted murder simply do not do justice to the savagery of the attacks.

Perhaps viewing the images below - so 'insignificant' an attack that it will surely go almost completely unreported - will convey a taste of the realities and the danger facing Israelis who live near and among the thugs who celebrate such deeds.

Every week or so, we republish here the latest of Yehudit Tayar's reports on the war that is mostly unreported: we invite you to review the most recent one: "25-Dec-12: Scenes from the front lines, courtesy of the Tayar Report". Yehudit's bulletins leave little doubt about the growing rate and scope of rock hurling and boulder-throwing attacks like today's.

The images above and below of the vehicle come from the Israel National News report of today's attack on the family from Rehalim. 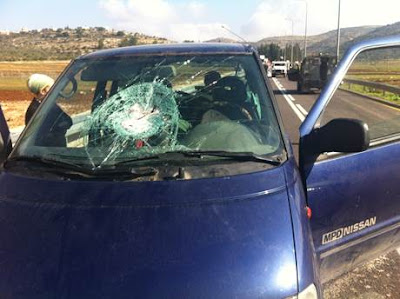 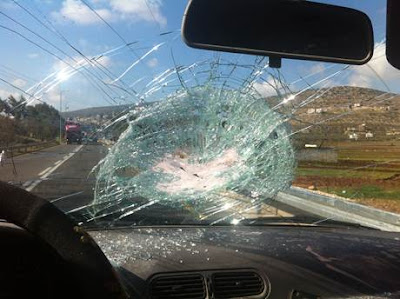 B"H
Shocking as these rock throwing incidents are, what is more shocking and disturbing is the media downplay of such incidents. No matter how provoked, I am not about to throw rocks at a moving car or even a stationary one because I am we'll aware of the consequences of such actions and the danger to life.

The only thing more outrageous than the Arab attacks on Jews is the inaction of the Jewish state in (1) protecting its citizens and (2) catching and punishing the murderous criminals so severely that the next "nationalist hero" wets his pants just contemplating the consequences of giving in to his savage urges.

Having said that, the question is why don't Israelis mount wire wind-screen protectors like the ones that used to be popular in Australia a while ago?