21-Mar-11: Why Palestinian Arab condemnations of babies being murdered in their beds are a fraud 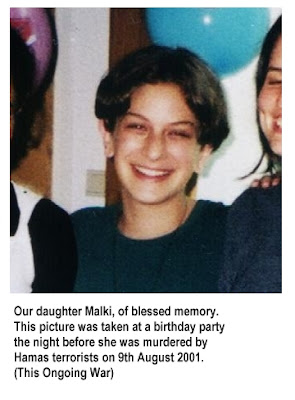 Since experiencing the loss by murder of our fifteen year old daughter, we have come to understand that, for many people, terrorism remains truly incomprehensible. People often speak of looking for root causes, but it’s clear that few will trouble themselves to examine the context in which such acts happen.

This has consequences for how we fight the terrorists. We have a very strong sense that unless society at large faces up to this issue of context, ineffective decisions will continue to be taken. And the terrorists are going to keep winning.

When five members of a Jewish family living in the small community of Itamar were stabbed to death in their beds last Sabbath, the condemnations from officials in the local Palestinian Arab government bodies were predictably formulaic. They said they condemned the brutal murders.

Did they mean it? We can know by looking at what those officials said and say when they speak to their own citizens.

One day before the massacre in Itamar ten days ago, Palestinian Authority television which is the mouthpiece of the Mahmoud Abbas regime broadcast a program in honour of one of its former employees. As Palestinian Media Watch documents, a PA TV film crew is shown interviewing the relatives of a woman called Ahlam Tamimi. She lives in an Israeli prison serving multiple life sentences for one of the most heinous crimes known in these troubled parts.

The program praises her, praises the actions that put her in prison, and unequivocally identifies with the longing of Tamimi’s family members for her and for her release. The camera focuses on a certificate awarded by Fatah, headed by Mahmoud Abbas, calling Tamimi "the heroic prisoner."

Watching this, which countless Palestinian Arab families did, no one would be left in doubt as to what official Palestinian Arab society thinks of Tamimi and of the chain of events that brought this evidently heroic figure to an Israeli cell.

This Tamimi is the murderer of our daughter and of fourteen (more correctly fifteen as you can see here) innocent Israelis. She is articulate, capable and very proud of what she did, and everyone watching the program is encouraged to share that pride. The head of the Palestinian Arab political pyramid, Abbas, is closely identified with that pride. Killing Israeli children is something to be proud of, the program teaches and Abbas confirms. Palestinian Arab society holds this Tamimi up as an example to be emulated.

This is a constant theme in Palestinian Arab society. For years, Palestinian Media Watch has documented the ongoing Palestinian Authority policy of glorifying terrorists as role models.

Why? Because – as PMW points out, this is one of the most effective means of promoting terror and ensuring it goes on.

“In honoring the worst killers, the PA is simultaneously giving approval to murder and enticing future terrorists with assurances of glory and honor if they succeed in killing. Terror and murder become the Palestinian’s ticket to fame, honor and glory.”

Keep these thoughts in mind when the crocodile tears of the politicians behind the murders next make an appearance on your television screen or news page.